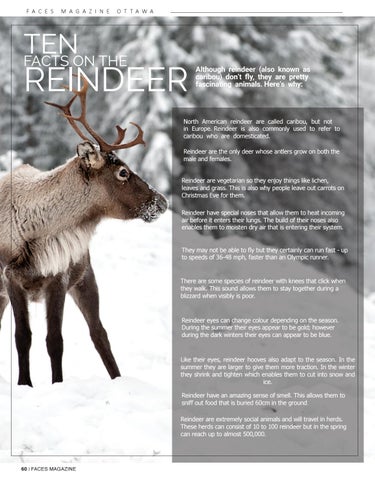 TEN FACTS ON THE

North American reindeer are called caribou, but not in Europe. Reindeer is also commonly used to refer to caribou who are domesticated. Reindeer are the only deer whose antlers grow on both the male and females. Reindeer are vegetarian so they enjoy things like lichen, leaves and grass. This is also why people leave out carrots on Christmas Eve for them. Reindeer have special noses that allow them to heat incoming air before it enters their lungs. The build of their noses also enables them to moisten dry air that is entering their system. They may not be able to fly but they certainly can run fast - up to speeds of 36-48 mph, faster than an Olympic runner.

There are some species of reindeer with knees that click when they walk. This sound allows them to stay together during a blizzard when visibly is poor.

Like their eyes, reindeer hooves also adapt to the season. In the summer they are larger to give them more traction. In the winter they shrink and tighten which enables them to cut into snow and ice. Reindeer have an amazing sense of smell. This allows them to sniff out food that is buried 60cm in the ground. Reindeer are extremely social animals and will travel in herds. These herds can consist of 10 to 100 reindeer but in the spring can reach up to almost 500,000.