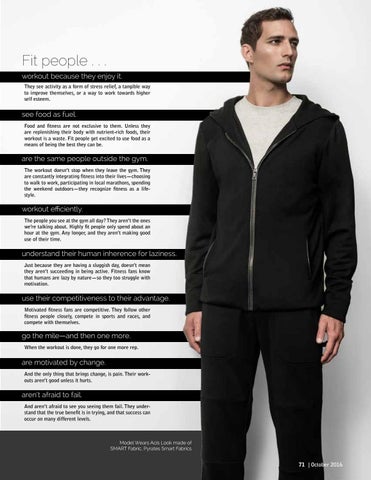 Fit people . . . workout because they enjoy it. They see activity as a form of stress relief, a tangible way to improve themselves, or a way to work towards higher self esteem.

see food as fuel. Food and fitness are not exclusive to them. Unless they are replenishing their body with nutrient-rich foods, their workout is a waste. Fit people get excited to use food as a means of being the best they can be.

are the same people outside the gym. The workout doesn’t stop when they leave the gym. They are constantly integrating fitness into their lives—choosing to walk to work, participating in local marathons, spending the weekend outdoors—they recognize fitness as a lifestyle.

workout efficiently. The people you see at the gym all day? They aren’t the ones we’re talking about. Highly fit people only spend about an hour at the gym. Any longer, and they aren’t making good use of their time.

understand their human inherence for laziness. Just because they are having a sluggish day, doesn’t mean they aren’t succeeding in being active. Fitness fans know that humans are lazy by nature—so they too struggle with motivation.

use their competitiveness to their advantage. Motivated fitness fans are competitive. They follow other fitness people closely, compete in sports and races, and compete with themselves.

go the mile—and then one more. When the workout is done, they go for one more rep.

are motivated by change. And the only thing that brings change, is pain. Their workouts aren’t good unless it hurts.

aren’t afraid to fail. And aren’t afraid to see you seeing them fail. They understand that the true benefit is in trying, and that success can occur on many different levels.