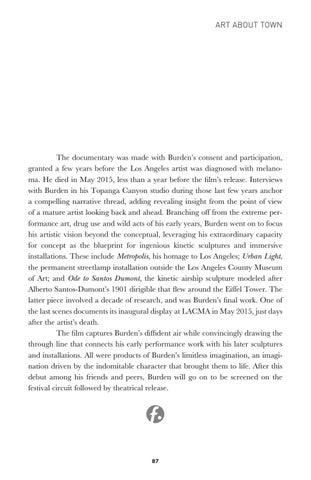 The documentary was made with Burden’s consent and participation, granted a few years before the Los Angeles artist was diagnosed with melanoma. He died in May 2015, less than a year before the film’s release. Interviews with Burden in his Topanga Canyon studio during those last few years anchor a compelling narrative thread, adding revealing insight from the point of view of a mature artist looking back and ahead. Branching off from the extreme performance art, drug use and wild acts of his early years, Burden went on to focus his artistic vision beyond the conceptual, leveraging his extraordinary capacity for concept as the blueprint for ingenious kinetic sculptures and immersive installations. These include Metropolis, his homage to Los Angeles; Urban Light, the permanent streetlamp installation outside the Los Angeles County Museum of Art; and Ode to Santos Dumont, the kinetic airship sculpture modeled after Alberto Santos-Dumont’s 1901 dirigible that flew around the Eiffel Tower. The latter piece involved a decade of research, and was Burden’s final work. One of the last scenes documents its inaugural display at LACMA in May 2015, just days after the artist’s death. The film captures Burden’s diffident air while convincingly drawing the through line that connects his early performance work with his later sculptures and installations. All were products of Burden’s limitless imagination, an imagination driven by the indomitable character that brought them to life. After this debut among his friends and peers, Burden will go on to be screened on the festival circuit followed by theatrical release.