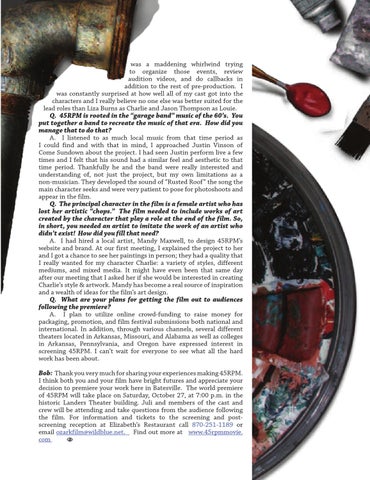 was a maddening whirlwind trying to organize those events, review audition videos, and do callbacks in addition to the rest of pre-production. I was constantly surprised at how well all of my cast got into the characters and I really believe no one else was better suited for the lead roles than Liza Burns as Charlie and Jason Thompson as Louie. Q. 45RPM is rooted in the “garage band” music of the 60’s. You put together a band to recreate the music of that era. How did you manage that to do that? A. I listened to as much local music from that time period as I could find and with that in mind, I approached Justin Vinson of Come Sundown about the project. I had seen Justin perform live a few times and I felt that his sound had a similar feel and aesthetic to that time period. Thankfully he and the band were really interested and understanding of, not just the project, but my own limitations as a non-musician. They developed the sound of “Rusted Roof” the song the main character seeks and were very patient to pose for photoshoots and appear in the film. Q. The principal character in the film is a female artist who has lost her artistic “chops.” The film needed to include works of art created by the character that play a role at the end of the film. So, in short, you needed an artist to imitate the work of an artist who didn’t exist! How did you fill that need? A. I had hired a local artist, Mandy Maxwell, to design 45RPM’s website and brand. At our first meeting, I explained the project to her and I got a chance to see her paintings in person; they had a quality that I really wanted for my character Charlie: a variety of styles, different mediums, and mixed media. It might have even been that same day after our meeting that I asked her if she would be interested in creating Charlie’s style &amp; artwork. Mandy has become a real source of inspiration and a wealth of ideas for the film’s art design. Q. What are your plans for getting the film out to audiences following the premiere? A. I plan to utilize online crowd-funding to raise money for packaging, promotion, and film festival submissions both national and international. In addition, through various channels, several different theaters located in Arkansas, Missouri, and Alabama as well as colleges in Arkansas, Pennsylvania, and Oregon have expressed interest in screening 45RPM. I can’t wait for everyone to see what all the hard work has been about. Bob: Thank you very much for sharing your experiences making 45RPM. I think both you and your film have bright futures and appreciate your decision to premiere your work here in Batesville. The world premiere of 45RPM will take place on Saturday, October 27, at 7:00 p.m. in the historic Landers Theater building. Juli and members of the cast and crew will be attending and take questions from the audience following the film. For information and tickets to the screening and postscreening reception at Elizabeth’s Restaurant call 870-251-1189 or email ozarkfilm@wildblue.net. Find out more at www.45rpmmovie. com N

Full of local goodness, like Kay Southerland's HOME, her daughter Juliet's Organic Olive Oil business, Northeast Arkansas Angels Pageant, and much, much more. We bid Autumn Hunter goodbye in this issue and only hope to have her back from time to time. 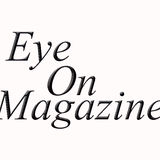