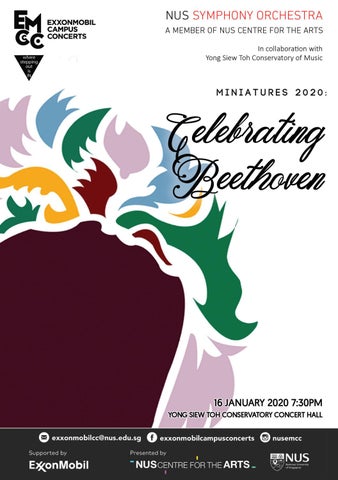 ABOUT NUS SYMPHONY ORCHESTRA The Orchestra was formally established as the NUS Concert Orchestra in 1979 under the auspices of the former University of Singapore and the directorship of Mr Paul Abisheganaden. Inaugurated as the NUS Symphony Orchestra in 1995, its beginnings can be traced back to the 1920s in the form of a Chamber Ensemble. With over 100 musicians from across the university’s different faculties, the NUS Symphony Orchestra (NUSSO) provides undergraduates with the opportunity to pursue their musical interests while promoting an appreciation for the arts in Singapore. Its central mission is to be an education-centric orchestra, focused on cultivating a culture of excellence through the practice of music and advocating orchestral music to the public. NUSSO has performed concerts in several NUS Arts Festivals, and has taken part in numerous international competitions and festivals. Through its diverse repertoire, the orchestra forged a reputation both locally and internationally. NUSSO took part in the 2016 Festival Orchestre Giovanili (Florence Youth Festival) in Italy, and in 2013, participated in the prestigious Summa Cum Laude International Festival, claiming 2nd place. @nussymphonyorchestra

ABOUT MINIATURES Introduced in 2008, Miniatures was the culmination of our musicians’ passion of performing with like-minded friends in the intimate setting of small ensembles. Over the years, programming for Miniatures evolved and took on an important role in complementing NUSSO’s usual full orchestra repertoire, also featuring collaborations with musicians from the Yong Siew Toh Conservatory of Music. It has provided students with the opportunity to explore works that entail different playing techniques and classical music genres. In line with Beethoven’s 250th birthday, the 2020 edition of Miniatures honours the contributions of one of the most pivotal figures in classical music. This evening, the musicians will be presenting works that have influenced or were influenced by Beethoven, as tribute to the composer’s undaunting spirit and relentless passion for music.

Concerto No. 1 for Marimba and Percussion Ensemble I. Saudação (Greetings) IV. Despedida (Farewell)

of eight when he learned piano and violin under the tutelage of Singaporean instructors – Goh Soon Tioe, Tan Kah Chin, Teo Kian Seng, Moses Wang, and Vivien Goh. In 1981, he obtained his Licentiate of the Royal Schools of Music for violin and viola, and won First Prize in the Viola Open Section at the Singapore National Music Competition. Under the Public Service Commission Scholarship, Soon Lee studied at the Eastman School of Music at the University of Rochester, graduating with a Bachelor of Music (Distinction) in 1983. He studied under world-renowned violists Atar Arad and Francis Tursi, and completed a twoyear conducting course with Professors David Effron and Donald Hunsberger. He was Principal Violist at the Heidelberg Music Festival in 1984 and 1986 and was awarded a scholarship to study viola under Kim Kashkashian at the Lausanne Academy of Music in Switzerland in 1986. From 1987 to 1997, Soon Lee was with the Singapore Symphony Orchestra (SSO), serving as Sub-Principal Violist from 1989 to 1997. He was Singapore’s only representative member at the 1988 World Philharmonic Orchestra in Montreal, Canada. Soon Lee conducted the SSO in the Opening and Closing Ceremonies of the 1983 SEA Games and the 1996 World Trade Organisation First Ministerial Conference’s Farewell Concert. During the National Day Parade in 1997, he also conducted the Asian Youth Orchestra. He was the Assistant Conductor of the Singapore Youth Orchestra (SYO) from 1990 to 1997 and was responsible for the SYO Training Ensemble. From 2005 to 2011, he was Music Director/ Principal Conductor of the Singapore National Youth Orchestra. During this time, he was also the Associate Principal of String Performance at School of the Arts (SOTA) from 2006 to 2013.

NUTTAKAMON SUPATTRANONT Nuttakamon Supattranont started playing the trumpet at the age of 7 in the marching band of Rajavinit School and Patumwan Demonstration School. In 2017, she successfully auditioned into the Thai Youth Orchestra. She was the Principal Trumpeter of the Siam Sinfonietta (2018) and the Princess Gadyani Vadhana Institute of Music Youth Orchestra (2018). As a member of the Thai Youth Orchestra, she participated in the Summa Cum Laude Festival in Vienna, Austria and won first prize. She was also a member of the Siam Sinfonietta, who were invited to play at the New York Music festival in 2017. She attained a gold medal prize at the SET music competition 2017. In 2018, she participated in the TIWSE Competition in Thailand and attained 2nd prize. Supattranont was enrolled in the Young Artist Music Program (Pre-college) in 2016 at Mahidol University as a classical trumpet major, studying under Professor Alongkorn Laosaichuea. She also received a full scholarship from Mahidol University in 2017. Now, she is studying at the Yong Siew Toh Conservatory of Music, National University of Singapore as a classical trumpet major under the tutelage of Professor Jon Dante.

JOEY LAU Joey Lau, 20, is a Year 4 Violin Performance Major student at the Yong Siew Toh Conservatory of Music (YSTCM). She gained early admission into YSTCM at the age of 16 and is currently under the tutelage of Prof Qian Zhou, Head of Strings. Being the 2017 Goh Soon Tioe Centenary Award Winner, Joey was most recently awarded the 3rd prize in the National Piano & Violin Competition (Artist Category) and was also the recipient of the Paul Abisheganaden Grant for Artistic Excellence in 2019. Besides winning prizes in Singapore, she was also a two-time winner of the Danube International Concerto Competition in 2016 and 2017. Joey has also been invited to perform at the Lee Kuan Yew Water Prize Ceremony in 2014 and the 28th SEA Games Opening Ceremony in 2015. Her most recent international experience was taking part in the Youth Music Culture Guangdong Festival as the concertmaster and also in the Verbier Festival as a member of the Junior Orchestra back in 2017 and 2018. Other than performing on home grounds, Joey has been on concert stages in China, UK, Italy, USA, Hungary, and Switzerland. Joey currently plays on a 1852 Andrea Postacchini violin on loan from the Rin Collection.

Along with prominent Jazz and Brazilian influences, Rosauro’s concertos demonstrate influences from Beethoven. Both Beethoven and Rosauro are said to compose music based heavily on their emotions. Distinct mood conflicts were indeed a common feature in many of Beethoven’s compositions; to Beethoven, embodying emotions was a commonality in his practice. Similarly, beneath the catchy rhythms and charming melodies, passion and emotion underly Rosauro’s unique writing style.

Like Beethoven, Mendelssohn was a prolific composer of chamber music. In this Piano Trio, the first movement opens with a passionate melody introduced by the Cello, which is then reiterated and developed by the Piano and Violin later throughout the piece. During his time, Beethoven had initiated the process of granting each instrumental voice more authority and independence. Mendelssohn’s Piano Trio No. 1 demonstrates this, with textures that grow thicker each time the melody is played, as each instrumental part became more independent and elaborate.

Brahms was well-known for modelling his compositions after the legendary Beethoven. This piano quartet has many dramatic nuances, which are reminiscent of Beethoven’s tuneful melodies, contrasting textures, expressive tensions and triumphant fanfares. It also demonstrates Brahms’ finesse in innovative, coherent structures, and till today, this piece remains a classic in chamber music repertoire.

The first movement of Weissenborn’s pieces for 3 Bassoons, titled ‘Serenade’, begins with a solemn statement by the first Bassoon, setting the tone for the introduction to the piece. The movement bears strong hints of Beethoven’s 9th Symphony, featuring an almost identical imitation from the second subject of the Symphony’s fourth movement. Reminiscent of Beethoven’s writing style, Weissenborn also utilises elongated codas of repeated dominant-tonic chord sequences.

PROGRAMME NOTES Rondo in A Major for Violin and String Quartet D438 FRANZ SCHUBERT Joey Lau, violin Written for a violin soloist and an accompanying string quartet, this piece is structurally divided into two sections - the slow and melodious introduction followed by the lively Rondo. This Rondo is said to be modelled after the lyrical finale of Beethoven’s E Minor Sonata. But despite the parallels, Schubert’s Rondo is far from a slavish imitation. The Rondo can more than hold its own against Beethoven’s sonata, with the final chords ringing jubilantly as an end to the masterpiece.

D’Addona’s Grand Fanfare begins with a fanfare leading into a fast triumphant section, followed by a rhythmic mixed-meter section. The piece then eases into a slow lyrical section before recapitulating the main theme and concluding with several exhilarating modulations. Much like many of Beethoven’s works, the idea of thematic economy is evident in D’Addona’s Fanfare, where the main theme from the first section is rewoven into different forms throughout the subsequent sections of the piece.

Haydn was a prolific composer of the Classical era and had great influence over Beethoven’s works, having been a teacher of his for several years. This threemovement Concerto serves as a platform for the trumpet soloist to demonstrate her technical and lyrical virtuosity, as much as it serves as a testimony to Haydn’s compositional range - with gentle melodies in the slow Andante section to dazzling figurations in the fast Rondo.

Beethoven’s Egmont Overture was written as part of Johann Wolfgang von Goethe’s 1787 play, Egmont. As with the play, the theme of political oppression overthrown in the name of freedom runs throughout the music. The triumph of good over evil, or, light over darkness, is portrayed through the structure of the work: major tonalities replace minor at the moment of victory, and bright orchestral sonorities succeed somber, threatening ones.

ENSEMBLE MUSICIANS Concerto No. 1 for Marimba and Percussion Ensemble

ABOUT EXXONMOBIL CAMPUS CONCERTS Powered by ExxonMobil Asia Pacific Pte Limited since 1986, ExxonMobil Campus Concerts (EMCC) is a series of free-admission performances presented by NUS Centre For the Arts. Working with young artists as well as established professional practitioners to share their love for the arts with the wider community, EMCC fosters a vibrant space for experimentation, practice and creation. Audiences are invited to engage with new artists, new works and new ways of thinking through a diversity of shows as part of NUSâ&#x20AC;&#x2122;s vibrant campus arts scene.

EXXONMOBIL REWARDS PROGRAMME We would like to reward arts supporters of EMCC with a gift this season. Register and catch three or more shows to be rewarded. The lucky winners will be notified via email at the end of the season. @Exxonmobilcampusconcerts

ABOUT NUS CENTRE FOR THE ARTS Established in 1993, NUS Centre For the Arts (CFA) is a vibrant space for the appreciation of the arts and nurturing of the creative and inquiring spirit. We support student engagement with the arts and the integration of the arts into the life of the University. CFA includes the NUS Museum, NUS Baba House and a Talent and Development arm that oversees 21 student arts excellence groups. Through our myriad of programmes, practices, exhibitions, workshops and outreach, such as NUS Arts Festival and the ExxonMobil Campus Concerts, we enrich the university experience and contribute to the building of knowledge and transformation of students. We also manage facilities such as the University Cultural Centre, with its 1700-seat Hall and 425-seat Theatre, and rehearsal spaces in Runme Shaw CFA Studios and University Town. Join Friends of CFA, our complimentary membership programme that brings the arts and people together for enjoyment and learning. Find out more at cfa.nus. edu.sg/get-involved/friends-of-cfa/. @nuscfa

And last but not least, thank you to all our family, friends, and supporters who have made this concert possible.

“ ” “Don’t only practice your art, but force your way into its secrets, for it and knowledge can raise men to the divine.” BEETHOVEN