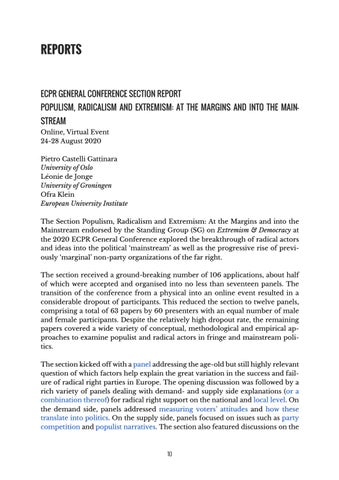 ECPR GENERAL CONFERENCE SECTION REPORT POPULISM, RADICALISM AND EXTREMISM: AT THE MARGINS AND INTO THE MAINSTREAM Online, Virtual Event 24-28 August 2020 Pietro Castelli Gattinara University of Oslo Léonie de Jonge University of Groningen Ofra Klein European University Institute The Section Populism, Radicalism and Extremism: At the Margins and into the Mainstream endorsed by the Standing Group (SG) on Extremism &amp; Democracy at the 2020 ECPR General Conference explored the breakthrough of radical actors and ideas into the political ‘mainstream’ as well as the progressive rise of previously ‘marginal’ non-party organizations of the far right. The section received a ground-breaking number of 106 applications, about half of which were accepted and organised into no less than seventeen panels. The transition of the conference from a physical into an online event resulted in a considerable dropout of participants. This reduced the section to twelve panels, comprising a total of 63 papers by 60 presenters with an equal number of male and female participants. Despite the relatively high dropout rate, the remaining papers covered a wide variety of conceptual, methodological and empirical approaches to examine populist and radical actors in fringe and mainstream politics. The section kicked off with a panel addressing the age-old but still highly relevant question of which factors help explain the great variation in the success and failure of radical right parties in Europe. The opening discussion was followed by a rich variety of panels dealing with demand- and supply side explanations (or a combination thereof) for radical right support on the national and local level. On the demand side, panels addressed measuring voters’ attitudes and how these translate into politics. On the supply side, panels focused on issues such as party competition and populist narratives. The section also featured discussions on the 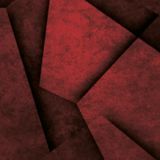