Paschal why the 31st Dail should not be the default Dail 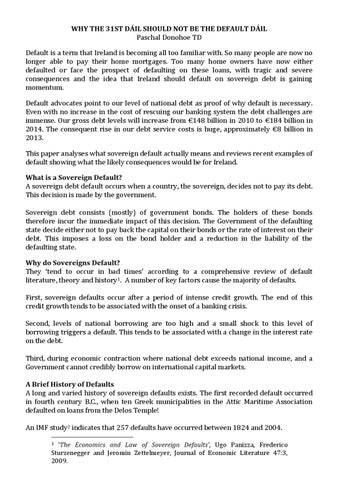 WHY THE 31ST DÁIL SHOULD NOT BE THE DEFAULT DÁIL Paschal Donohoe TD Default is a term that Ireland is becoming all too familiar with. So many people are now no longer able to pay their home mortgages. Too many home owners have now either defaulted or face the prospect of defaulting on these loans, with tragic and severe consequences and the idea that Ireland should default on sovereign debt is gaining momentum. Default advocates point to our level of national debt as proof of why default is necessary. Even with no increase in the cost of rescuing our banking system the debt challenges are immense. Our gross debt levels will increase from €148 billion in 2010 to €184 billion in 2014. The consequent rise in our debt service costs is huge, approximately €8 billion in 2013. This paper analyses what sovereign default actually means and reviews recent examples of default showing what the likely consequences would be for Ireland. What is a Sovereign Default? A sovereign debt default occurs when a country, the sovereign, decides not to pay its debt. This decision is made by the government. Sovereign debt consists (mostly) of government bonds. The holders of these bonds therefore incur the immediate impact of this decision. The Government of the defaulting state decide either not to pay back the capital on their bonds or the rate of interest on their debt. This imposes a loss on the bond holder and a reduction in the liability of the defaulting state. Why do Sovereigns Default? They ‘tend to occur in bad times’ according to a comprehensive review of default literature, theory and history1. A number of key factors cause the majority of defaults. First, sovereign defaults occur after a period of intense credit growth. The end of this credit growth tends to be associated with the onset of a banking crisis. Second, levels of national borrowing are too high and a small shock to this level of borrowing triggers a default. This tends to be associated with a change in the interest rate on the debt. Third, during economic contraction where national debt exceeds national income, and a Government cannot credibly borrow on international capital markets. A Brief History of Defaults A long and varied history of sovereign defaults exists. The first recorded default occurred in fourth century B.C., when ten Greek municipalities in the Attic Maritime Association defaulted on loans from the Delos Temple! An IMF study2 indicates that 257 defaults have occurred between 1824 and 2004. ‘The Economics and Law of Sovereign Defaults’, Ugo Panizza, Frederico Sturzenegger and Jeromin Zettelmeyer, Journal of Economic Literature 47:3, 2009. 1

As indicated above a distinct geographical allocation exists across defaults. Latin America and Africa account for 74% of all defaults. A sovereign default has not occurred in Western Europe since the Great Depression. Defaults tend to come in waves. The first wave of defaults, in the period covered by this study, occurred between 1824 and 1840, following a lending boom by newly independent Latin American countries. The next cluster commenced in 1861 and ended in 1920, with most of the defaults again occurring within Latin America. The last default peak occurred between 1921 and 1940 when 39 sovereign defaults occurred, as governments grappled with the impact of the Great Depression. More recent prominent defaults are noted below. Country Russia

This long and varied history allows an understanding of what happens when the sovereign defaults. The consequences of Sovereign Defaults -

Swift Budgetary Adjustment: When a sovereign defaults, their ability to borrow is hugely and quickly reduced as the Government loses access to capital markets. A defaulting government can only spend what it can directly raise through taxation or through significantly lower borrowing. Such economies tend to be in deficit where current spending is greater than taxes raised. In the immediate period after default the Government either balances their budget or moves to a current surplus to pay interest on restructured debt. ‘Indeed, the median primary surplus during the three

years after default was about 2% of GDP in the sample consisting of all economies that defaulted since 1976..’3. -

Exclusion from capital markets. As losses are imposed on bond holders they are wary of supplying credit to defaulting governments for fear of incurring future loss. During the 1980s defaulting countries were excluded from capital markets for an average period of 4 years. A recent study of exclusion concluded that sovereign defaulters between 1980 and 2005 ‘regain(ed) partial market access after 5.7 years on average (median of 3.0 years) while it takes 8.4 years on average (median of 7.0 years) to regain full market access..’4.

Higher Cost of Borrowing. In the period after the default the cost of borrowing increases. This is in recognition of the greater risk to the lender of dealing with a defaulting sovereign. A study on the impact of bond spreads for defaulting economies stated that ‘a default in year t – 1 has a large and statistically significant effect on spreads amounting to 400 basis points’ 5. The same study concluded that the risk premium moved to 250 points in the second year before returning to normal trends.

Reputational Damage. Literature in this area concludes that the reputation of governments is impacted by sovereign defaults. If a government defaults once, the market expectation is that a future default is always likely. This assessment drives all of the above reactions.

All of these assessments are based on empirical studies of decades of defaults. However there are a number of reasons why an Irish default would be un-precedented and unique. What makes Ireland different? The Irish economy has 3 factors that are vital in consideration of default consequences. First, Ireland is a member of a single currency zone. An immediate step taken by all modern defaulting economies has been to devalue their currency. This is to provide a quick ‘stimulus’ of export competitiveness. As Ireland does not have a national currency this option is not open to an Irish Government. Second, Ireland is a developed country. All recent academic research focuses on the impact of defaults in emerging economies. The collateral impact of a developed economy default will be larger due to greater integration with the European economy. Third, the lender of last resort is already present in the Irish State. Defaulting economies make recourse to the IMF. Ireland has already done so with our participation in the IMF/EU support programme. A default involving non payment to our lenders of last resort would be unprecedented and history offers little guidance as to their reaction.

Based on recent defaults, what would happen if Ireland defaulted? Sovereign default is now new and not unique. If this paper demonstrates nothing else it shows the frequency of this debt event. However a potential Irish default would be unique due to the lack of a national currency, the fact that it has already made resort to the lender of last resort and the level of development and integration with the European economy. This paper makes the following conclusions in relation to the decision to unilaterally default on loan payments to current bondholders and the IMF/ECB programme. First, Ireland has no further ‘lender of last resort’ to whom they can appeal. The likely consequences would therefore be at the harsher end of the response spectrum. Second, the enforced delivery of a budget surplus would be exceptionally harsh. In 2010 the underlying budget deficit (excluding the costs of the banking recapitalisation) was 11.6% of GDP. This would need to move to either balance or a budget surplus. In a single year this would be a 12 point budget adjustment. To put this in context, recent budgets will reduce the budget deficit by 2.5 points. A unilateral default would force a change of almost 5 times this magnitude in a single year. This would be a savage change that could destroy our domestic and local economy. Third, based on historical precedent, Ireland could be excluded from capital markets for up to 4 years. An exclusion of one year would force a budgetary adjustment greater than Ireland has managed in the last 3 years. Exclusion for many years would cause unprecedented hardship. Fourth, the level of development ‘enjoyed’ by the Irish economy would be a decisive factor in determining the allocation of default costs. Recent figures from the Central Bank indicate that Irish residents and institutions own €14 billion of government debt. The belief that a default would push cost onto purely foreign investors ignores the fact that many bond holders are Irish. Further destabilisation of our banking sector would occur. Finally, studies indicate the presence of a risk premium upon a return to capital markets. A default, followed by capital market exclusion, would then lead to higher costs of borrowing for up to 2 years. Again, this would cause further and massive pressure on our ability to sustain our current level of public services and taxation. Conclusion Should the 31st Dáil be the default Dáil? In short, no. A unilateral default upon our commitments to institutions and capital markets would be a unique and high risk experiment in a long history of sovereign defaults. History shows that default in not cost free. In fact, the costs are high and long-lasting. There is no reason to assume an Irish default would be any different. Far from a step to economic salvation, a unilateral sovereign default would prolong our national stay in financial ruin. Advocates of this strategy have a responsibility to explain why the lessons of default history would not apply to Ireland. Our Government must and will do all it can to ensure our country does not face this prospect. The reminder of our economic sovereignty and security is too precious to gamble with.

Paschal why the 31st Dail should not be the default Dail 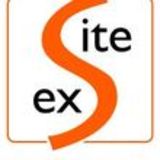