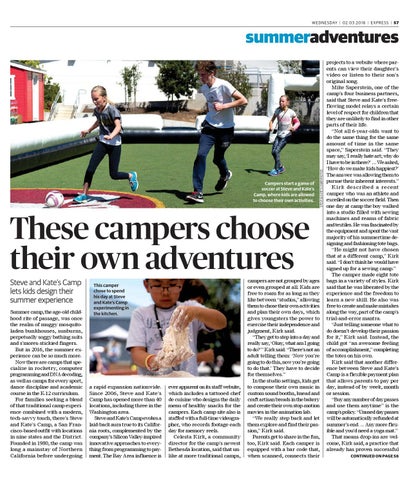 Campers start a game of soccer at Steve and Kate’s Camp, where kids are allowed to choose their own activities.

Summer camp, the age-old childhood rite of passage, was once the realm of muggy mosquitoladen bunkhouses, sunburns, perpetually soggy bathing suits and s’mores-stickied fingers. But in 2016, the summer experience can be so much more. Now there are camps that specialize in rocketry, computer programming and DNA decoding, as well as camps for every sport, dance discipline and academic course in the K-12 curriculum. For families seeking a blend of that traditional camp experience combined with a modern, tech-savvy touch, there’s Steve and Kate’s Camp, a San Francisco-based outfit with locations in nine states and the District. Founded in 1980, the camp was long a mainstay of Northern California before undergoing

This camper chose to spend his day at Steve and Kate’s Camp experimenting in the kitchen.

a rapid expansion nationwide. Since 2006, Steve and Kate’s Camp has opened more than 40 locations, including three in the Washington area. Steve and Kate’s Camp evokes a laid-back aura true to its California roots, complemented by the company’s Silicon Valley-inspired innovative approaches to everything from programming to payment. The Bay Area influence is

ever apparent on its staff website, which includes a tattooed chef de cuisine who designs the daily menu of healthy snacks for the campers. Each camp site also is staffed with a full-time videographer, who records footage each day for memory reels. Celesta Kirk, a community director for the camp’s newest Bethesda location, said that unlike at more traditional camps,

campers are not grouped by ages or even grouped at all. Kids are free to roam for as long as they like between “studios,” allowing them to chose their own activities and plan their own days, which gives youngsters the power to exercise their independence and judgment, Kirk said. “They get to step into a day and really say, ‘Okay, what am I going to do?’ ” Kirk said. “There’s not an adult telling them: ‘Now you’re going to do this, now you’re going to do that.’ They have to decide for themselves.” In the studio settings, kids get to compose their own music in custom sound booths, knead and craft artisan breads in the bakery and create their own stop-motion movies in the animation lab. “We really step back and let them explore and find their passion,” Kirk said. Parents get to share in the fun, too, Kirk said. Each camper is equipped with a bar code that, when scanned, connects their

summeradventures projects to a website where parents can view their daughter’s video or listen to their son’s original song. Mike Saperstein, one of the camp’s four business partners, said that Steve and Kate’s freeflowing model relays a certain level of respect for children that they are unlikely to find in other parts of their life. “Not all 6-year-olds want to do the same thing for the same amount of time in the same space,” Saperstein said. “They may say, ‘I really hate art; why do I have to be in there?’ … We asked, ‘How do we make kids happiest?’ The answer was allowing them to pursue their inherent interests.” Kirk described a recent camper who was an athlete and excelled on the soccer field. Then one day at camp the boy walked into a studio filled with sewing machines and reams of fabric and textiles. He was fascinated by the equipment and spent the vast majority of his summertime designing and fashioning tote bags. “He might not have chosen that at a different camp,” Kirk said. “I don’t think he would have signed up for a sewing camp.” The camper made eight tote bags in a variety of styles. Kirk said that he was liberated by the experience and the freedom to learn a new skill. He also was free to create and make mistakes along the way, part of the camp’s trial-and-error mantra. “Just telling someone what to do doesn’t develop their passion for it,” Kirk said. Instead, the child got “an awesome feeling of accomplishment,” completing the totes on his own. Kirk said that another difference between Steve and Kate’s Camp is a flexible payment plan that allows parents to pay per day, instead of by week, month or session. “Buy any number of day passes and use them anytime” is the camp’s policy. “Unused day passes will be automatically refunded at summer’s end. ... Any more flexible and you’d need a yoga mat.” That means drop-ins are welcome, Kirk said, a practice that already has proven successful CONTINUED ON PAGE S8