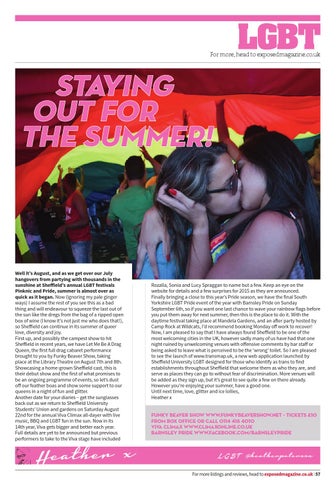 For more, head to exposedmagazine.co.uk

Well it’s August, and as we get over our July hangovers from partying with thousands in the sunshine at Sheffield’s annual LGBT festivals Pinknic and Pride, summer is almost over as quick as it began. Now (ignoring my pale ginger ways) I assume the rest of you see this as a bad thing and will endeavour to squeeze the last out of the sun like the dregs from the bag of a ripped open box of wine (I know it’s not just me who does that!), so Sheffield can continue in its summer of queer love, diversity and joy. First up, and possibly the campest show to hit Sheffield in recent years, we have Let Me Be A Drag Queen, the first full drag cabaret performance brought to you by Funky Beaver Show, taking place at the Library Theatre on August 7th and 8th. Showcasing a home-grown Sheffield cast, this is their debut show and the first of what promises to be an ongoing programme of events, so let’s dust off our feather boas and show some support to our queens in a night of fun and glitter. Another date for your diaries – get the sunglasses back out as we return to Sheffield University Students’ Union and gardens on Saturday August 22nd for the annual Viva Climax all-dayer with live music, BBQ and LGBT fun in the sun. Now in its 14th year, Viva gets bigger and better each year. Full details are yet to be announced but previous performers to take to the Viva stage have included

Rozalla, Sonia and Lucy Spraggan to name but a few. Keep an eye on the website for details and a few surprises for 2015 as they are announced. Finally bringing a close to this year’s Pride season, we have the final South Yorkshire LGBT Pride event of the year with Barnsley Pride on Sunday September 6th, so if you want one last chance to wave your rainbow flags before you put them away for next summer, then this is the place to do it. With the daytime festival taking place at Mandela Gardens, and an after party hosted by Camp Rock at Wildcats, I’d recommend booking Monday off work to recover! Now, I am pleased to say that I have always found Sheffield to be one of the most welcoming cities in the UK, however sadly many of us have had that one night ruined by unwelcoming venues with offensive comments by bar staff or being asked to leave what is perceived to be the ‘wrong’ toilet. So I am pleased to see the launch of www.transmap.uk, a new web application launched by Sheffield University LGBT designed for those who identify as trans to find establishments throughout Sheffield that welcome them as who they are, and serve as places they can go to without fear of discrimination. More venues will be added as they sign up, but it’s great to see quite a few on there already. However you’re enjoying your summer, have a good one. Until next time, love, glitter and ice lollies, Heather x Funky Beaver Show www.funkybeavershow.net – Tickets £10 from box office or call 0114 418 4010 Viva Climax www.climaxonline.co.uk Barnsley Pride www.facebook.com/BarnsleyPride

For more listings and reviews, head to exposedmagazine.co.uk | 57 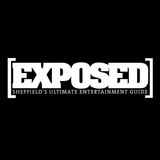