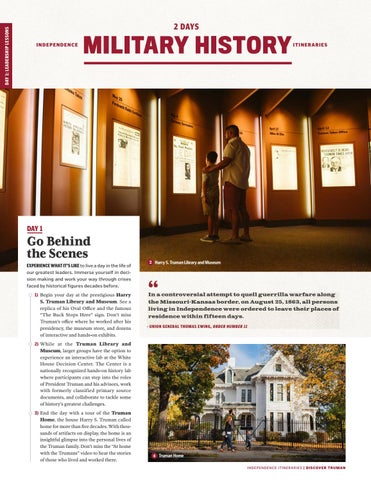 Go Behind the Scenes EXPERIENCE WHAT IT’S LIKE to live a day in the life of our greatest leaders. Immerse yourself in decision making and work your way through crises faced by historical figures decades before. 1) Begin your day at the prestigious Harry S. Truman Library and Museum. See a replica of his Oval Office and the famous “The Buck Stops Here” sign. Don’t miss Truman’s office where he worked after his presidency, the museum store, and dozens of interactive and hands-on exhibits.

In a controversial attempt to quell guerrilla warfare along the Missouri-Kansas border, on August 25, 1863, all persons living in Independence were ordered to leave their places of residence within fifteen days.

2) While at the Truman Library and Museum, larger groups have the option to experience an interactive lab at the White House Decision Center. The Center is a nationally recognized hands-on history lab where participants can step into the roles of President Truman and his advisors, work with formerly classified primary source documents, and collaborate to tackle some of history’s greatest challenges. 3) End the day with a tour of the Truman Home, the house Harry S. Truman called home for more than five decades. With thousands of artifacts on display, the home is an insightful glimpse into the personal lives of the Truman family. Don’t miss the “At home with the Trumans” video to hear the stories of those who lived and worked there.

DAY 2: PLOTS FROM THE PAST

Step into the Past INDEPENDENCE, MISSOURI, occupies a fascinating place in American history. Many of the Civil War’s most important battles happened here. Walk on the same ground as those brave infantrymen and cavalry and hear the echoes of history through these sites. 1) Take a driving tour of Civil War Sites in Independence, MO. The tour includes five stops for the First Battle of Independence, one of the first urban battles of the Civil War on August 11, 1862, and ten stops for the Second Battle of Independence, including the Battle of the Little Blue on October 21 and 22, 1864, a battle between 15,000 Union and Confederate forces. 2) Next, head to the 1859 Jail, Marshal’s Home and Museum to unlock the history of Civil War criminals and the lifestyle of a County Marshal. See where Frank James lived for six months and the home where the Marshal’s family lived, and touch the mighty limestone and tremendous iron doors guarding each cell. 3) Take your tour group back in history to explore Civil War battlefields on a mule-drawn wagon

ride with Pioneer Trails Adventures. Hear the stories of Civil War Generals as you uncover several battle sites. 4) After, tour one of the most significant historical sites in western Missouri, the BinghamWaggoner Estate. Built in 1852, along the 1846 alignment of the Santa Fe Trail, this estate was owned by George Caleb Bingham, famed Missouri Civil War artist. This wellpreserved museum takes you back to the 1800s where history comes to life through the original furnishings and paintings.

5) Finish your military tour at the Jackson County Museum of Art located inside the Historic Truman Courthouse. The courthouse’s second floor showcases the Jackson County Museum of Art, featuring more than two dozen paintings by famed Civil War artist George Caleb Bingham. 6) Process all the things you’ve learned today while enjoying a delicious dinner at Historic Independence Square. Choose from more than a dozen of award-winning, locally owned diners to satisfy all your cravings. 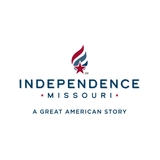