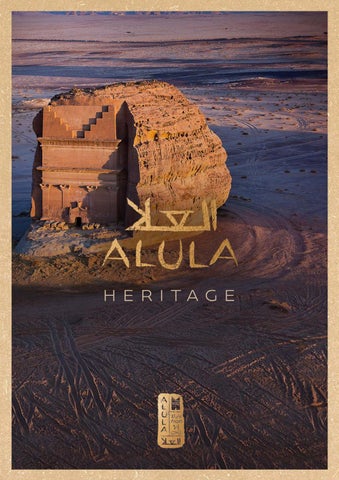 MAJOR TEMPLE COMPLEX AT THE ANCIENT CAPITAL CITY OF DADAN

INSCRIPTIONS ON THE ROCKS AT JABAL IKMAH

BUILDINGS IN THE ALULA OLD TOWN

THE LAND OF CIVILISATIONS Visitors to AlUla are immersed in a land of ancient civilisations spanning more than 200,000 years of human history. From prehistoric times to the present day, AlUla attracted people who came to take advantage of the favourable climate and who settled or journeyed through its landscape. Evidence has been found that humans started to settle in AlUla around 5000 BCE and that successive civilisations continued there for 7000 years till today. This expansive landscape, with much still to discover, holds a timeless mystery that has been carried through its complex and diverse history. Today, visitors are absorbed into a rich story, taking them on a journey through a living museum of preserved tombs, sandstone outcrops, historic dwellings, and monuments, both natural and human-made. This land is an unseen wonder of the world - an adventure awaits all who visit AlUla and its historical and archaeological sites.

THE TOMBS OF ALULA AlUla is a place of extraordinary human endeavour. As home to ancient and significant civilisations, this destination is finally unveiling its unique heritage to the world. Layer upon layer of human history is waiting to be explored, including the breathtaking archaeological ruins that trace the lives of the ancient cultures who built cities on this land. The Dadanites, Lihyanites, and Nabataeans all built cities here in AlUla and thousands of tombs dot the land from more than 7000 successive civilisations. Today visitors will discover Hegra, a Nabataean site marked by over 100 well-preserved monumental tombs, 94 with elaborate facades, carved from rock formations that surround the ancient city that once stood at its heart. At the ancient city of Dadan, visitors can see two pairs of lions in cut into the cliffs that overlook where the ancient capital once stood.

MONUMENTAL ALULA ROCK ART TRAILS AlUla is home to remarkable heritage carved in ancient rocks. The unique architecture in AlUla merges with the stunning landscape, creating outstanding works of art. It is within this union that the uniqueness of AlUla is found. Jabal Ikmah, near Dadan, is a valley of more than 500 rocks inscribed in more than 10 different languages, scripts which show are the precursor of Arabic language. Modern-day guests will discover rock art depicting humans, chariots, harps, camels, bovines, goats, scorpions, and ibex - all spotted through the unique landscape and monumental AlUla rock art trails. Visitors can take a guided rock-art trail with a local rawi to find out more about the significance of the rock art found.

ALULA AND THE INCENSE ROUTE Located in north-west Saudi Arabia, on the original incense road and pilgrimage route to Makkah, this historical land was a significant resting stop for traders and pilgrims. As a trading route hub, AlUla was once crisscrossed by caravans loaded with incense, spices, beads, glazed ceramics and more. This ancient oasis in a desert valley provided shelter and water and was a hub of trade and cultural exchange for millennia and still bears witness to those who passed through. With its role in the incense trade, AlUla also likely had access to further markets and trade routes, including out to the Indian Ocean and the Red Sea. These connections have enabled the area to act as a cultural crossroads for thousands of years.

THE NABATAEANS OF ALULA The single most significant heritage landmark in AlUla is the Nabataean city of Hegra, a 52-hectare ancient city, which in 2008 was listed as Saudi Arabiaâ&amp;#x20AC;&amp;#x2122;s first UNESCO World Heritage Site. The Nabataean Kingdom controlled much of the trade routes of the region from the 1st century BCE until around 106 CE, amassing large wealth and drawing the envy of its neighbors. It stretched south along the Red Sea coast into the Hejaz, up as far north as Damascu. The Nabataeans generated revenues from the trade caravans that transported frankincense, myrrh and other spices. The Wadi Al-Qura (the Valley of Villages), running through AlUla, sheltered by sandstone mountains, created a perfect environment for civilisations to thrive. Timeless authenticity is revealed at every turn by those who visit today.

FOUR KEY HERITAGE SITES DADAN AlUla is home to many fascinating historical and archaeological sites such as Ancient Dadan, the capital of the Dadanite and Lihyanite Kingdoms. Dadan is a live excavation site - new secrets from the ruins of the ancient city continued to be revealed every day by archaeologists. Dadan was an important capital city during the first millennium BCE, the heart of a kingdom that also includes nearby areas of special cultic significance, including at Jabal Ikmah, Umm Daraj and Tell al-Kathib. Visitors to the site can see the rock-cut tombs of Dadan, cut into the cliffs that overlook where the ancient capital once stood. Most famous amongst these are the beautifully carved Lion Tombs.

JABAL IKMAH The landscape of AlUla has provided some of the most extensive examples of writtern records carved into its landscape, providing clues to ancient lives and languages. Jabal Ikmah has been called an open air â&amp;#x20AC;&amp;#x2DC;libraryâ&amp;#x20AC;&amp;#x2122;, with over 500 inscriptions mostly dating to the Dadanite and Lihyanite periods. Inscriptions detail the origins of more than 10 different languages include the pre-cursor to Arabic showing the density of different cultures that collided in this landscape. Visit Jabal Ikmah and you will find hundreds of ancient written inscriptions describing pilgrimages, rituals, and offerings on display. Multiple sites, including Jabal Ikmah, feature petroglyphs comprising representations of human, animal or symbolic figures.

HEGRA One of the most significant heritage landmarks in AlUla is the Nabataean city of Hegra, an ancient 52-hectare town, notably listed as Saudi Arabiaâ&amp;#x20AC;&amp;#x2122;s first UNESCO World Heritage Site in 2008. Excavations at Hegra since the mid-2000s have revealed that the Nabataeans settled at Hegra around the mid-1st century BCE. The Nabataeans here mastered extensive agricultural practices, building over 130 wells to extract the precious water resources. As well as its more than 100 monumental tombs, and thousands of simpler rock-cut tombs, Hegra was once home to a thriving city. Indeed, the Dadanites, Lihyanites, and Nabataeans all built their cities here. Timeless authenticity is revealed at every turn by those who visit the lost city of Hegra today.

ALULA OLD TOWN AlUla is finally revealing its unique heritage to the world, including the remarkable AlUla Old Town. Located in the narrowest part of the AlUla valley, the AlUla Old Town is built on a slight elevation, and is overlooked by the Musa bin Nusayr Castle, a citadel dating to at least the 10th century. Continuously occupied from the 12th century until the 1980s, the Old Town settlement, with its mudbrick houses, intricate urban pattern, outstanding fort and the remains of arts and craft, are of tremendous historical significance. In the 12th century, AlUla Old Town became an essential settlement along the pilgrimage route from Damascus to Makkah. Inhabited up until the 1980s, within living memory, the Old Town provides a unique opportunity to gather oral histories and learn about a vanishing way of life in this unique settlement. At present, over 900 properties have been identified, including 400 shops and five rahbas, or town squares mosques.