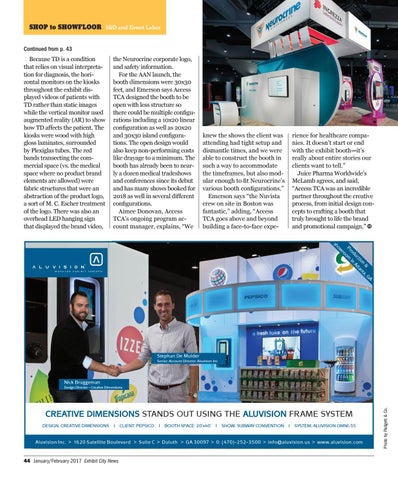 SHOP to SHOWFLOOR I&amp;D and Event Labor Continued from p. 43 Because TD is a condition that relies on visual interpretation for diagnosis, the horizontal monitors on the kiosks throughout the exhibit displayed videos of patients with TD rather than static images while the vertical monitor used augmented reality (AR) to show how TD affects the patient. The kiosks were wood with high gloss laminates, surrounded by Plexiglas tubes. The red bands transecting the commercial space (vs. the medical space where no product brand elements are allowed) were fabric structures that were an abstraction of the product logo, a sort of M. C. Escher treatment of the logo. There was also an overhead LED hanging sign that displayed the brand video,

the Neurocrine corporate logo, and safety information. For the AAN launch, the booth dimensions were 30x30 feet, and Emerson says Access TCA designed the booth to be open with less structure so there could be multiple configurations including a 10x20 linear configuration as well as 20x20 and 30x30 island configurations. The open design would also keep non-performing costs like drayage to a minimum. The booth has already been to nearly a dozen medical tradeshows and conferences since its debut and has many shows booked for 2018 as well in several different configurations. Aimee Donovan, Access TCA’s ongoing program account manager, explains, “We

knew the shows the client was attending had tight setup and dismantle times, and we were able to construct the booth in such a way to accommodate the timeframes, but also modular enough to fit Neurocrine’s various booth configurations.” Emerson says “the Nuvista crew on site in Boston was fantastic,” adding, “Access TCA goes above and beyond building a face-to-face expe-

rience for healthcare companies. It doesn’t start or end with the exhibit booth—it’s really about entire stories our clients want to tell.” Juice Pharma Worldwide’s McLamb agrees, and said, “Access TCA was an incredible partner throughout the creative process, from initial design concepts to crafting a booth that truly brought to life the brand and promotional campaign.” 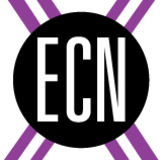