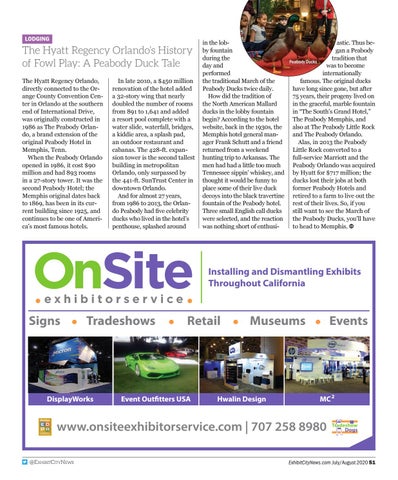 The Hyatt Regency Orlando’s History of Fowl Play: A Peabody Duck Tale The Hyatt Regency Orlando, directly connected to the Orange County Convention Center in Orlando at the southern end of International Drive, was originally constructed in 1986 as The Peabody Orlando, a brand extension of the original Peabody Hotel in Memphis, Tenn. When the Peabody Orlando opened in 1986, it cost $90 million and had 893 rooms in a 27-story tower. It was the second Peabody Hotel; the Memphis original dates back to 1869, has been in its current building since 1925, and continues to be one of America’s most famous hotels.

In late 2010, a $450 million renovation of the hotel added a 32-story wing that nearly doubled the number of rooms from 891 to 1,641 and added a resort pool complete with a water slide, waterfall, bridges, a kiddie area, a splash pad, an outdoor restaurant and cabanas. The 428-ft. expansion tower is the second tallest building in metropolitan Orlando, only surpassed by the 441-ft. SunTrust Center in downtown Orlando. And for almost 27 years, from 1986 to 2013, the Orlando Peabody had five celebrity ducks who lived in the hotel’s penthouse, splashed around

in the lobby fountain during the day and performed the traditional March of the Peabody Ducks twice daily. How did the tradition of the North American Mallard ducks in the lobby fountain begin? According to the hotel website, back in the 1930s, the Memphis hotel general manager Frank Schutt and a friend returned from a weekend hunting trip to Arkansas. The men had had a little too much Tennessee sippin’ whiskey, and thought it would be funny to place some of their live duck decoys into the black travertine fountain of the Peabody hotel. Three small English call ducks were selected, and the reaction was nothing short of enthusi-

astic. Thus began a Peabody tradition that Peabody Ducks was to become internationally famous. The original ducks have long since gone, but after 75 years, their progeny lived on in the graceful, marble fountain in “The South’s Grand Hotel,” The Peabody Memphis, and also at The Peabody Little Rock and The Peabody Orlando. Alas, in 2013 the Peabody Little Rock converted to a full-service Marriott and the Peabody Orlando was acquired by Hyatt for $717 million; the ducks lost their jobs at both former Peabody Hotels and retired to a farm to live out the rest of their lives. So, if you still want to see the March of the Peabody Ducks, you’ll have to head to Memphis.

Installing and Dismantling Exhibits Throughout California