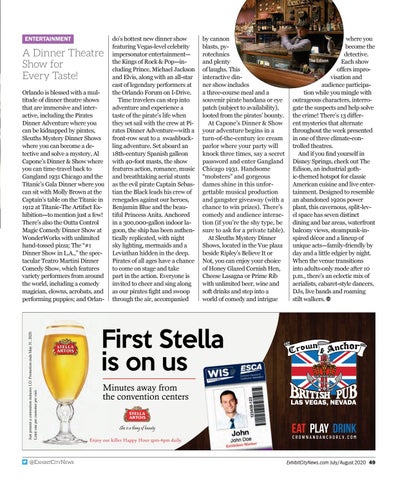 A Dinner Theatre Show for Every Taste! Orlando is blessed with a multitude of dinner theatre shows that are immersive and interactive, including the Pirates Dinner Adventure where you can be kidnapped by pirates, Sleuths Mystery Dinner Shows where you can become a detective and solve a mystery, Al Capone’s Dinner & Show where you can time-travel back to Gangland 1931 Chicago and the Titanic’s Gala Dinner where you can sit with Molly Brown at the Captain’s table on the Titanic in 1912 at Titanic-The Artifact Exhibition—to mention just a few! There’s also the Outta Control Magic Comedy Dinner Show at WonderWorks with unlimited hand-tossed pizza; The “#1 Dinner Show in L.A.,” the spectacular Teatro Martini Dinner Comedy Show, which features variety performers from around the world, including a comedy magician, clowns, acrobats, and performing puppies; and Orlan-

do’s hottest new dinner show featuring Vegas-level celebrity impersonator entertainment— the Kings of Rock & Pop—including Prince, Michael Jackson and Elvis, along with an all-star cast of legendary performers at the Orlando Forum on I-Drive. Time travelers can step into adventure and experience a taste of the pirate’s life when they set sail with the crew at Pirates Dinner Adventure—with a front-row seat to a swashbuckling adventure. Set aboard an 18th-century Spanish galleon with 40-foot masts, the show features action, romance, music and breathtaking aerial stunts as the evil pirate Captain Sebastian the Black leads his crew of renegades against our heroes, Benjamin Blue and the beautiful Princess Anita. Anchored in a 300,000-gallon indoor lagoon, the ship has been authentically replicated, with night sky lighting, mermaids and a Leviathan hidden in the deep. Pirates of all ages have a chance to come on stage and take part in the action. Everyone is invited to cheer and sing along as our pirates fight and swoop through the air, accompanied

by cannon blasts, pyrotechnics and plenty of laughs. This interactive dinner show includes a three-course meal and a souvenir pirate bandana or eye patch (subject to availability), looted from the pirates’ bounty. At Capone’s Dinner & Show your adventure begins in a turn-of-the-century ice cream parlor where your party will knock three times, say a secret password and enter Gangland Chicago 1931. Handsome “mobsters” and gorgeous dames shine in this unforgettable musical production and gangster giveaway (with a chance to win prizes). There’s comedy and audience interaction (if you’re the shy type, be sure to ask for a private table). At Sleuths Mystery Dinner Shows, located in the Vue plaza beside Ripley’s Believe It or Not, you can enjoy your choice of Honey Glazed Cornish Hen, Cheese Lasagna or Prime Rib with unlimited beer, wine and soft drinks and step into a world of comedy and intrigue

where you become the detective. The Edison Each show offers improvisation and audience participation while you mingle with outrageous characters, interrogate the suspects and help solve the crime! There’s 13 different mysteries that alternate throughout the week presented in one of three climate-controlled theatres. And if you find yourself in Disney Springs, check out The Edison, an industrial gothic-themed hotspot for classic American cuisine and live entertainment. Designed to resemble an abandoned 1920s power plant, this cavernous, split-level space has seven distinct dining and bar areas, waterfront balcony views, steampunk-inspired décor and a lineup of unique acts—family-friendly by day and a little edgier by night. When the venue transitions into adults-only mode after 10 p.m., there’s an eclectic mix of aerialists, cabaret-style dancers, DJs, live bands and roaming stilt walkers.