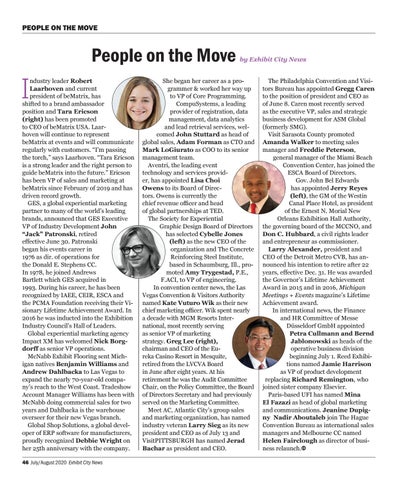 PEOPLE ON THE MOVE

People on the Move

ndustry leader Robert Laarhoven and current president of beMatrix, has shifted to a brand ambassador position and Tara Ericson (right) has been promoted to CEO of beMatrix USA. Laarhoven will continue to represent beMatrix at events and will communicate regularly with customers. “I’m passing the torch,” says Laarhoven. “Tara Ericson is a strong leader and the right person to guide beMatrix into the future.” Ericson has been VP of sales and marketing at beMatrix since February of 2019 and has driven record growth. GES, a global experiential marketing partner to many of the world’s leading brands, announced that GES Executive VP of Industry Development John “Jack” Patronski, retired effective June 30. Patronski began his events career in 1976 as dir. of operations for the Donald E. Stephens CC. In 1978, he joined Andrews Bartlett which GES acquired in 1993. During his career, he has been recognized by IAEE, CEIR, ESCA and the PCMA Foundation receiving their Visionary Lifetime Achievement Award. In 2016 he was inducted into the Exhibition Industry Council’s Hall of Leaders. Global experiential marketing agency Impact XM has welcomed Nick Borgdorff as senior VP operations. McNabb Exhibit Flooring sent Michigan natives Benjamin Williams and Andrew Dahlbacka to Las Vegas to expand the nearly 70-year-old company’s reach to the West Coast. Tradeshow Account Manager Williams has been with McNabb doing commercial sales for two years and Dahlbacka is the warehouse overseer for their new Vegas branch. Global Shop Solutions, a global developer of ERP software for manufacturers, proudly recognized Debbie Wright on her 25th anniversary with the company.

She began her career as a programmer & worked her way up to VP of Core Programming. CompuSystems, a leading provider of registration, data management, data analytics and lead retrieval services, welcomed John Stuttard as head of global sales, Adam Forman as CTO and Mark LoGiurato as COO to its senior management team. Aventri, the leading event technology and services provider, has appointed Lisa Choi Owens to its Board of Directors. Owens is currently the chief revenue officer and head of global partnerships at TED. The Society for Experiential Graphic Design Board of Directors has selected Cybelle Jones (left) as the new CEO of the organization and The Concrete Reinforcing Steel Institute, based in Schaumburg, Ill., promoted Amy Trygestad, P.E., F.ACI, to VP of engineering. In convention center news, the Las Vegas Convention & Visitors Authority named Kate Vuturo Wik as their new chief marketing officer. Wik spent nearly a decade with MGM Resorts International, most recently serving as senior VP of marketing strategy. Greg Lee (right), chairman and CEO of the Eureka Casino Resort in Mesquite, retired from the LVCVA Board in June after eight years. At his retirement he was the Audit Committee Chair, on the Policy Committee, the Board of Directors Secretary and had previously served on the Marketing Committee. Meet AC, Atlantic City’s group sales and marketing organization, has named industry veteran Larry Sieg as its new president and CEO as of July 13 and VisitPITTSBURGH has named Jerad Bachar as president and CEO.