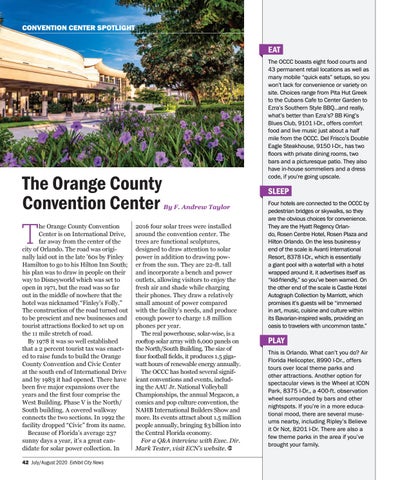 he Orange County Convention Center is on International Drive, far away from the center of the city of Orlando. The road was originally laid out in the late ’60s by Finley Hamilton to go to his Hilton Inn South; his plan was to draw in people on their way to Disneyworld which was set to open in 1971, but the road was so far out in the middle of nowhere that the hotel was nicknamed “Finley’s Folly.” The construction of the road turned out to be prescient and new businesses and tourist attractions flocked to set up on the 11 mile stretch of road. By 1978 it was so well established that a 2 percent tourist tax was enacted to raise funds to build the Orange County Convention and Civic Center at the south end of International Drive and by 1983 it had opened. There have been five major expansions over the years and the first four comprise the West Building. Phase V is the North/ South building. A covered walkway connects the two sections. In 1992 the facility dropped “Civic” from its name. Because of Florida’s average 237 sunny days a year, it’s a great candidate for solar power collection. In

The OCCC boasts eight food courts and 43 permanent retail locations as well as many mobile “quick eats” setups, so you won’t lack for convenience or variety on site. Choices range from Pita Hut Greek to the Cubans Cafe to Center Garden to Ezra’s Southern Style BBQ...and really, what’s better than Ezra’s? BB King’s Blues Club, 9101 I-Dr., offers comfort food and live music just about a half mile from the OCCC. Del Frisco’s Double Eagle Steakhouse, 9150 I-Dr., has two floors with private dining rooms, two bars and a picturesque patio. They also have in-house sommeliers and a dress code, if you’re going upscale.

2016 four solar trees were installed around the convention center. The trees are functional sculptures, designed to draw attention to solar power in addition to drawing power from the sun. They are 22-ft. tall and incorporate a bench and power outlets, allowing visitors to enjoy the fresh air and shade while charging their phones. They draw a relatively small amount of power compared with the facility’s needs, and produce enough power to charge 1.8 million phones per year. The real powerhouse, solar-wise, is a rooftop solar array with 6,000 panels on the North/South Building. The size of four football fields, it produces 1.5 gigawatt hours of renewable energy annually.  The OCCC has hosted several significant conventions and events, including the AAU Jr. National Volleyball Championships, the annual Megacon, a comics and pop culture convention, the NAHB International Builders Show and more. Its events attract about 1.5 million people annually, bringing $3 billion into the Central Florida economy. For a Q&A interview with Exec. Dir. Mark Tester, visit ECN’s website.

Four hotels are connected to the OCCC by pedestrian bridges or skywalks, so they are the obvious choices for convenience. They are the Hyatt Regency Orlando, Rosen Centre Hotel, Rosen Plaza and Hilton Orlando. On the less business-y end of the scale is Avanti International Resort, 8378 I-Dr., which is essentially a giant pool with a waterfall with a hotel wrapped around it. it advertises itself as “kid-friendly,” so you’ve been warned. On the other end of the scale is Castle Hotel Autograph Collection by Marriott, which promises it’s guests will be “immersed in art, music, cuisine and culture within its Bavarian-inspired walls, providing an oasis to travelers with uncommon taste.”

PLAY This is Orlando. What can’t you do? Air Florida Helicopter, 8990 I-Dr., offers tours over local theme parks and other attractions. Another option for spectacular views is the Wheel at ICON Park, 8375 I-Dr., a 400-ft. observation wheel surrounded by bars and other nightspots. If you’re in a more educational mood, there are several museums nearby, including Ripley’s Believe it Or Not, 8201 I-Dr. There are also a few theme parks in the area if you’ve brought your family.