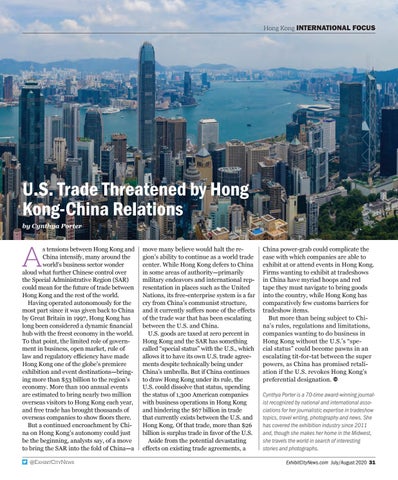 s tensions between Hong Kong and China intensify, many around the world’s business sector wonder aloud what further Chinese control over the Special Administrative Region (SAR) could mean for the future of trade between Hong Kong and the rest of the world. Having operated autonomously for the most part since it was given back to China by Great Britain in 1997, Hong Kong has long been considered a dynamic financial hub with the freest economy in the world. To that point, the limited role of government in business, open market, rule of law and regulatory efficiency have made Hong Kong one of the globe’s premiere exhibition and event destinations—bringing more than $53 billion to the region’s economy. More than 100 annual events are estimated to bring nearly two million overseas visitors to Hong Kong each year, and free trade has brought thousands of overseas companies to show floors there. But a continued encroachment by China on Hong Kong’s autonomy could just be the beginning, analysts say, of a move to bring the SAR into the fold of China—a @ExhibitCityNews

move many believe would halt the region’s ability to continue as a world trade center. While Hong Kong defers to China in some areas of authority—primarily military endeavors and international representation in places such as the United Nations, its free-enterprise system is a far cry from China’s communist structure, and it currently suffers none of the effects of the trade war that has been escalating between the U.S. and China. U.S. goods are taxed at zero percent in Hong Kong and the SAR has something called “special status” with the U.S., which allows it to have its own U.S. trade agreements despite technically being under China’s umbrella. But if China continues to draw Hong Kong under its rule, the U.S. could dissolve that status, upending the status of 1,300 American companies with business operations in Hong Kong and hindering the $67 billion in trade that currently exists between the U.S. and Hong Kong. Of that trade, more than $26 billion is surplus trade in favor of the U.S. Aside from the potential devastating effects on existing trade agreements, a

China power-grab could complicate the ease with which companies are able to exhibit at or attend events in Hong Kong. Firms wanting to exhibit at tradeshows in China have myriad hoops and red tape they must navigate to bring goods into the country, while Hong Kong has comparatively few customs barriers for tradeshow items. But more than being subject to China’s rules, regulations and limitations, companies wanting to do business in Hong Kong without the U.S.’s “special status” could become pawns in an escalating tit-for-tat between the super powers, as China has promised retaliation if the U.S. revokes Hong Kong’s preferential designation. Cynthya Porter is a 70-time award-winning journalist recognized by national and international associations for her journalistic expertise in tradeshow topics, travel writing, photography and news. She has covered the exhibition industry since 2011 and, though she makes her home in the Midwest, she travels the world in search of interesting stories and photographs. ExhibitCityNews.com July/August 2020 31