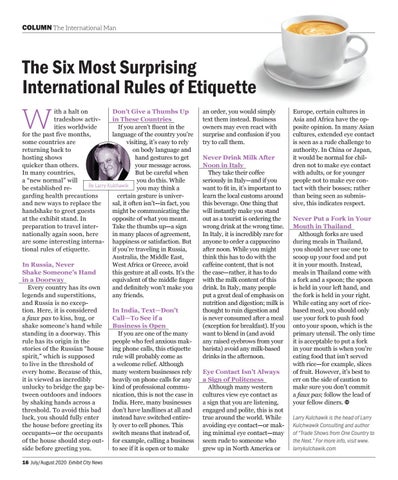 The Six Most Surprising International Rules of Etiquette

ith a halt on Don’t Give a Thumbs Up tradeshow activin These Countries ities worldwide If you aren’t fluent in the for the past five months, language of the country you’re some countries are visiting, it’s easy to rely returning back to on body language and hosting shows hand gestures to get quicker than others. your message across. In many countries, But be careful when a “new normal” will you do this. While By Larry Kulchawik be established reyou may think a garding health precautions certain gesture is univerand new ways to replace the sal, it often isn’t—in fact, you handshake to greet guests might be communicating the at the exhibit stand. In opposite of what you meant. preparation to travel interTake the thumbs up—a sign nationally again soon, here in many places of agreement, are some interesting interna- happiness or satisfaction. But tional rules of etiquette. if you’re traveling in Russia, Australia, the Middle East, In Russia, Never West Africa or Greece, avoid Shake Someone’s Hand this gesture at all costs. It’s the in a Doorway equivalent of the middle finger Every country has its own and definitely won’t make you legends and superstitions, any friends. and Russia is no exception. Here, it is considered In India, Text—Don’t a faux pas to kiss, hug, or Call—To See if a shake someone’s hand while Business is Open standing in a doorway. This If you are one of the many rule has its origin in the people who feel anxious makstories of the Russian “house ing phone calls, this etiquette spirit,” which is supposed rule will probably come as to live in the threshold of a welcome relief. Although every home. Because of this, many western businesses rely it is viewed as incredibly heavily on phone calls for any unlucky to bridge the gap be- kind of professional commutween outdoors and indoors nication, this is not the case in by shaking hands across a India. Here, many businesses threshold. To avoid this bad don’t have landlines at all and luck, you should fully enter instead have switched entirethe house before greeting its ly over to cell phones. This occupants—or the occupants switch means that instead of, of the house should step out- for example, calling a business side before greeting you. to see if it is open or to make

an order, you would simply text them instead. Business owners may even react with surprise and confusion if you try to call them. Never Drink Milk After Noon in Italy They take their coffee seriously in Italy—and if you want to fit in, it’s important to learn the local customs around this beverage. One thing that will instantly make you stand out as a tourist is ordering the wrong drink at the wrong time. In Italy, it is incredibly rare for anyone to order a cappuccino after noon. While you might think this has to do with the caffeine content, that is not the case—rather, it has to do with the milk content of this drink. In Italy, many people put a great deal of emphasis on nutrition and digestion; milk is thought to ruin digestion and is never consumed after a meal (exception for breakfast). If you want to blend in (and avoid any raised eyebrows from your barista) avoid any milk-based drinks in the afternoon. Eye Contact Isn’t Always a Sign of Politeness Although many western cultures view eye contact as a sign that you are listening, engaged and polite, this is not true around the world. While avoiding eye contact—or making minimal eye contact—may seem rude to someone who grew up in North America or

Europe, certain cultures in Asia and Africa have the opposite opinion. In many Asian cultures, extended eye contact is seen as a rude challenge to authority. In China or Japan, it would be normal for children not to make eye contact with adults, or for younger people not to make eye contact with their bosses; rather than being seen as submissive, this indicates respect. Never Put a Fork in Your Mouth in Thailand Although forks are used during meals in Thailand, you should never use one to scoop up your food and put it in your mouth. Instead, meals in Thailand come with a fork and a spoon; the spoon is held in your left hand, and the fork is held in your right. While eating any sort of ricebased meal, you should only use your fork to push food onto your spoon, which is the primary utensil. The only time it is acceptable to put a fork in your mouth is when you’re eating food that isn’t served with rice—for example, slices of fruit. However, it’s best to err on the side of caution to make sure you don’t commit a faux pas; follow the lead of your fellow diners. Larry Kulchawik is the head of Larry Kulchwawik Consulting and author of “Trade Shows from One Country to the Next.” For more info, visit www. larrykulchawik.com