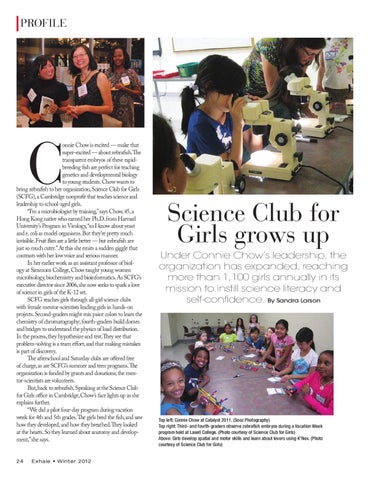 onnie Chow is excited — make that super-excited — about zebrafish. The transparent embryos of these rapidbreeding fish are perfect for teaching genetics and developmental biology to young students. Chow wants to bring zebrafish to her organization, Science Club for Girls (SCFG), a Cambridge nonprofit that teaches science and leadership to school-aged girls. “I’m a microbiologist by training,” says Chow, 45, a Hong Kong native who earned her Ph.D. from Harvard University’s Program in Virology, “so I know about yeast and e. coli as model organisms. But they’re pretty much invisible. Fruit flies are a little better — but zebrafish are just so much cuter.” At this she emits a sudden giggle that contrasts with her low voice and serious manner. In her earlier work as an assistant professor of biology at Simmons College, Chow taught young women microbiology, biochemistry and bioinformatics. As SCFG’s executive director since 2006, she now seeks to spark a love of science in girls of the K-12 set. SCFG reaches girls through all-girl science clubs with female mentor-scientists leading girls in hands-on projects. Second-graders might mix paint colors to learn the chemistry of chromatography; fourth-graders build domes and bridges to understand the physics of load distribution. In the process, they hypothesize and test. They see that problem-solving is a team effort, and that making mistakes is part of discovery. The afterschool and Saturday clubs are offered free of charge, as are SCFG’s summer and teen programs. The organization is funded by grants and donations; the mentor-scientists are volunteers. But, back to zebrafish. Speaking at the Science Club for Girls office in Cambridge, Chow’s face lights up as she explains further. “We did a pilot four-day program during vacation week for 4th and 5th grades. The girls bred the fish, and saw how they developed, and how they breathed. They looked at the hearts. So they learned about anatomy and development,” she says. 24

Science Club for Girls grows up Under Connie Chow’s leadership, the organization has expanded, reaching more than 1,100 girls annually in its mission to instill science literacy and self-confidence. By Sandra Larson