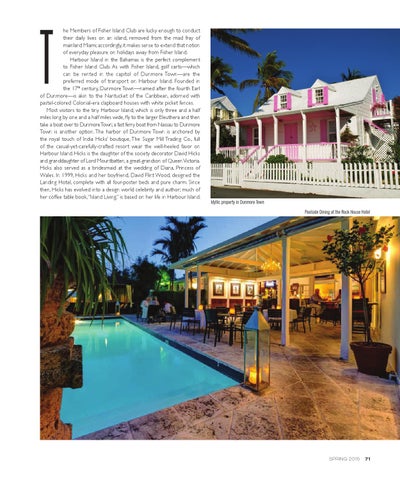 he Members of Fisher Island Club are lucky enough to conduct their daily lives on an island, removed from the mad fray of mainland Miami; accordingly, it makes sense to extend that notion of everyday pleasure on holidays away from Fisher Island. Harbour Island in the Bahamas is the perfect complement to Fisher Island Club. As with Fisher Island, golf carts—which can be rented in the capitol of Dunmore Town—are the preferred mode of transport on Harbour Island. Founded in the 17th century, Dunmore Town—named after the fourth Earl of Dunmore—is akin to the Nantucket of the Caribbean, adorned with pastel-colored Colonial-era clapboard houses with white picket fences. Most visitors to the tiny Harbour Island, which is only three and a half miles long by one and a half miles wide, fly to the larger Eleuthera and then take a boat over to Dunmore Town; a fast ferry boat from Nassau to Dunmore Town is another option. The harbor of Dunmore Town is anchored by the royal touch of India Hicks’ boutique, The Sugar Mill Trading Co., full of the casual-yet-carefully-crafted resort wear the well-heeled favor on Harbour Island. Hicks is the daughter of the society decorator David Hicks and granddaughter of Lord Mountbatten, a great-grandson of Queen Victoria. Hicks also served as a bridesmaid at the wedding of Diana, Princess of Wales. In 1999, Hicks and her boyfriend, David Flint Wood, designed the Landing Hotel, complete with all four-poster beds and pure charm. Since then, Hicks has evolved into a design world celebrity and author; much of her coffee table book, “Island Living,” is based on her life in Harbour Island.