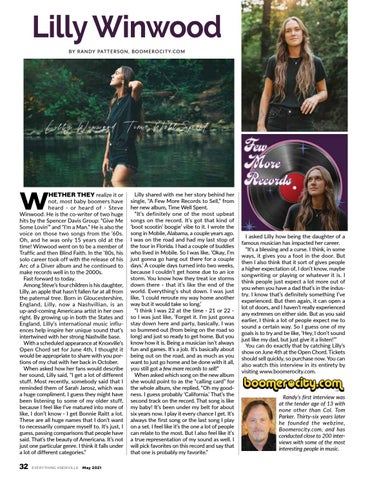 HETHER THEY realize it or not, most baby boomers have heard - or heard of - Steve Winwood. He is the co-writer of two huge hits by the Spencer Davis Group: “Give Me Some Lovin’” and “I’m a Man.” He is also the voice on those two songs from the ’60s. Oh, and he was only 15 years old at the time! Winwood went on to be a member of Traffic and then Blind Faith. In the ’80s, his solo career took off with the release of his Arc of a Diver album and he continued to make records well in to the 2000s. Fast forward to today. Among Steve’s four children is his daughter, Lilly, an apple that hasn’t fallen far at all from the paternal tree. Born in Gloucestershire, England, Lilly, now a Nashvillian, is an up-and-coming Americana artist in her own right. By growing up in both the States and England, Lilly’s international music influences help inspire her unique sound that’s intertwined with her strong Nashville base. With a scheduled appearance at Knoxville’s Open Chord set for June 4th, I thought it would be appropriate to share with you portions of my chat with her back in October. When asked how her fans would describe her sound, Lilly said, “I get a lot of different stuff. Most recently, somebody said that I reminded them of Sarah Jarosz, which was a huge compliment. I guess they might have been listening to some of my older stuff, because I feel like I’ve matured into more of like, I don’t know - I get Bonnie Raitt a lot. These are all huge names that I don’t want to necessarily compare myself to. It’s just, I guess, passing comparisons that people have said. That’s the beauty of Americana. It’s not just one particular genre. I think it falls under a lot of different categories.”

Lilly shared with me her story behind her single, “A Few More Records to Sell,” from her new album, Time Well Spent. “It’s definitely one of the most upbeat songs on the record. It’s got that kind of ‘boot scootin’ boogie’ vibe to it. I wrote the song in Mobile, Alabama, a couple years ago. I was on the road and had my last stop of the tour in Florida. I had a couple of buddies who lived in Mobile. So I was like, ‘Okay, I’m just gonna go hang out there for a couple days.’ A couple days turned into two weeks, because I couldn’t get home due to an ice storm. You know how they treat ice storms down there - that it’s like the end of the world. Everything’s shut down. I was just like, ‘I could reroute my way home another way but it would take so long.’ “I think I was 22 at the time - 21 or 22 so I was just like, ‘Forget it. I’m just gonna stay down here and party, basically. I was so bummed out (from being on the road so long) and just so ready to get home. But you know how it is. Being a musician isn’t always fun and games. It’s a job. It’s basically about being out on the road, and as much as you want to just go home and be done with it all, you still got a few more records to sell!” When asked which song on the new album she would point to as the “calling card” for the whole album, she replied, “Oh my goodness. I guess probably ‘California.’ That’s the second track on the record. That song is like my baby! It’s been under my belt for about six years now. I play it every chance I get. It’s always the first song or the last song I play on a set. I feel like it’s the one a lot of people can relate to the most. But I also feel like it’s a true representation of my sound as well. I will pick favorites on this record and say that that one is probably my favorite.”

I asked Lilly how being the daughter of a famous musician has impacted her career. “It’s a blessing and a curse. I think, in some ways, it gives you a foot in the door. But then I also think that it sort of gives people a higher expectation of, I don’t know, maybe songwriting or playing or whatever it is. I think people just expect a lot more out of you when you have a dad that’s in the industry. I know that’s definitely something I’ve experienced. But then again, it can open a lot of doors, and I haven’t really experienced any extremes on either side. But as you said earlier, I think a lot of people expect me to sound a certain way. So I guess one of my goals is to try and be like, ‘Hey, I don’t sound just like my dad, but just give it a listen!’” You can do exactly that by catching Lilly’s show on June 4th at the Open Chord. Tickets should sell quickly, so purchase now. You can also watch this interview in its entirety by visiting www.boomerocity.com.

Randy’s first interview was at the tender age of 13 with none other than Col. Tom Parker. Thirty-six years later he founded the webzine, Boomerocity.com, and has conducted close to 200 interviews with some of the most interesting people in music.

Everything Knoxville May 2021 Edition

Everything Knoxville May 2021 Edition