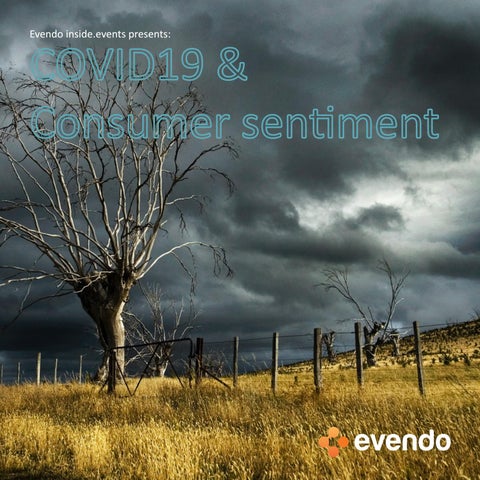 Hibernation The first phase following lockdown in many countries. Schools are closed. Shops are closed. Restaurants are closed. People are asked to remain indoor. Put short: Social life has been put to an instant stop. During this phase, consumers are likely to focus on ”survival” - on the basics in their lifes.

Focus of this publication Page 2

COVID19 CYCLUS When assessing the impacts of COVID19, Evendo utilizes a 4-phase model. This allows identification of milestones - and thus timing initiatives towards a ”moving target”. The below provides a simplified description of these steps.

Preparation Schools reopen. Shops reopen. Things are starting to move towards ”normalization”. There is ”light at the end of the tunnel”. Consumers are likely to start planning ahead - to dream - but are unlikely to enter into firm commitments, as timings are uncertain. People start to go out. Socializing on a small scale. They also start to plan ahead.

Execution Society has reopened, making consumers ”content” and comfortable that things will now not move backwards. Companies will look to boost productivity and bring teams back together. Consumers will increase their spending, as the level of comfortability increases. Ultimately, things are as normal as they can be.

While optimism, income impact, and spending intent are changing dramatically worldwide, global consumers are adopting new behaviors as the world shelters in place.

are pockets of increasing spending even as consumers universally pull back on discretionary spending. Online buying has jumped almost everywhere, but that shift has not come close to offsetting the overall reduction in spending.

As governments and organizations continue to work toward containing COVID19 and stemming the growing humanitarian toll it is exacting, consumers globally are feeling its economic effects. European countries are the least optimistic, while China stands out as the most optimistic country, having been the first to weather the worst of the pandemicâ&#x20AC;&#x2122;s effects. As countries move through the contagion curve, there

European countries, which have been hard hit by COVID19, are considerably less optimistic compared to their counterparts in Africa, Asia, and the Americas. Notably, consumers in China have seen their optimism increase to 53 percent over the past weeks.

How time is spent

Most consumers globally expect to spend less time working and more time consuming entertainment, including digital and video content, news, and social media. A notable exception is China. As it emerges from the worst effects of the pandemic, consumers plan to spend more time back at work.

Globally, consumers are shifting their time away from work and toward digital and video entertainment.

countries, Japan, and India, where 25 to 49 percent expect a decrease. In the final tier of countries—Brazil, South Africa, Germany, and Korea—more than half of the consumers (54 percent to 63 percent) expect decreased income.

In aggregate, consumers expect a large negative impact on income. Between 30 and 50 percent of consumers globally expect their household income to continue to fall over the next weeks, while few (less than 10 percent in most countries) expect an increase. Chinese consumers are the most optimistic, with 30 percent expecting salaries to increase—however, 37 percent still expect a decrease. The next tier of countries includes the United States, most of the European

of US and European expect their household income to decrease

result, expect to spend less. While US consumers are more optimistic, they match European consumers’ reluctance to spend.

Pockets of optimism remain across the globe, driving expectations of increased spending in some regions. Chinese consumers’ optimism results in a net increase in expected future spending, a situation also observed in Indonesia, Nigeria, and India. Other countries, including Brazil, Japan, and Portugal, have relatively low optimism but still expect to increase spending—potentially due to stocking-up behavior driven by stay-at-home orders. Most European consumers (including those in Italy, Spain, France, and the United Kingdom) are less optimistic and, as a

Globally, consumers are still spending (and sometimes spending more) on basics such as food, household supplies, and personal care items, as well as on home entertainment. Consumers are universally and dramatically pulling back on most discretionary spending. Some of the categories showing the most precipitous decline include restaurants, apparel, footwear, accessories, travel, and entertainment out of home. This behavior is consistent with large-scale shelter-in-place orders around the globe as well as consumersâ&#x20AC;&#x2122; stated expectations of reduced spending.

As countries progress along the contagion curve, there are pockets of increasing spending. Chinese consumers are beginning to spend more across a few categories outside of basics, including pet-care services and fitness and wellness. Their shopping habits before, during, and after the COVID19 peak show that shopping behavior after the peak resulted in more than 30 percent lower traffic but larger basket sizes for food purchases, and depressed traffic and consumption for apparel and department stores (40 to 50 percent below pre-COVID19 levels). In South Korea and Indonesia, food takeout and delivery is showing positive momentum.

bound, about 90 percent expect it will be more than two months before routines go back to normal, and more than 50 percent expect their finances to be impacted for more than four months. European countries that have been hit less hard by COVID-19 (the United Kingdom, France, Germany) are slightly more optimistic, with 60 percent of consumers expecting financial impact to last more than two months. In contrast, almost 100 percent of consumers in Japan and South Korea expect disruptions to their routines

Consumers globally expect long-lasting effects of COVID-19 on their personal routines and finances. More than 75 percent of consumers globally expect the impact to be felt for more than two months, and about 50 percent expect the duration to be for more than four months. Even in China and the US, where more than 40 percent of consumers are optimistic about the overall strength of their economies to re- How do Consumers react to COVID19 - and how should you, as an Event supplier, address this?

How do Consumers react to COVID19 - and how should you, as an Event supplier, address this?