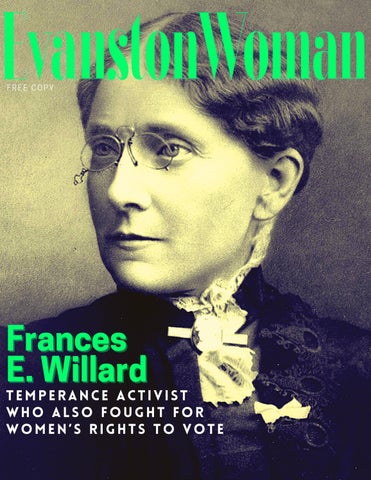 temperance activist Who also fought for women’s rights to vote

editor&#39;s corner As time continues, we are seeing events becoming a thing, once

again. On page 8 I share several great family-friendly events to

attend. One of my favorite events is the Taste of Evanston hosted by Lighthouse Rotary. This event

continues to bring together the best venues under one roof with

entertainment and fellowship on the

grounds of Dawes House, right off the Happy Spring!! I can not believe it&#39;s

been a full two years since Evanston went into shutdown. I can still

lake. I always suggest you purchase your tickets early, as the event continues to grow.

remember sitting at Firehouse Grill on

Another great event this year is the

announced, &quot;At 6 pm we are closing,

I encourage each of you to gather

Chicago/Main when the staff the Governor just closed all

restaurants in Cook County..&quot; My

heart sunk. I headed over to Jewel

Osco, as I looked around it seemed everyone was moving so fast, and the sounds of the scan machine

annual YWCA Race Against Racism. your friends and family and create a team to raise funds for the YWCA

were going off every second. As I

Thank you to all our readers and

had a chance to purchase the bare

five years! As we recover from the

looked around I was surprised I still

necessities. My life has changed 100% because of COVID-19. I would

certainly love to learn how COVID

changed your life. Let us continue to support our small businesses, and organizations that contribute to economic growth, and provide

supporters. We have accomplished pandemic, we appreciate all the

support. EWM is very so grateful to

continue to provide a magazine to

For the several years, Tosh Wilson and cousin Jacqui White had a vision to create a space that would close the gap on resources, social and racial econmics. That space was The Laundry Care-Evanston.After years of fundraising, pitching banks, and drawing in locals to provide support, Wilsom and Jacquie two women minorty businsss owners found themselves with more ambition to accomplish

WHO&#39;S AT THE AUX? &quot;The AUX is a commercial hub dedicated to healing, wellness, and racial equity – a space co-created and owned by the community. With a name derived from a sound system’s AUXiliary cord, this project is about the power of connection. For us the AUX means plugging into our life-giving essence so we can thrive as we live, learn, work and play. &quot; - The Aux Evanston

this mission. After many &#39;No&#39;s&quot; from local banks to open thier business, an opporitnty crossed their path. The AUX Evanston was the life line of a life time. Lori Laser of Glenco, a woman business owner of a nonprofit organization, The Growing Season brought together an opporutnty to combin efforts that

HOW CAN YOU LEND YOUR SUPPORT? Cook County and City of Evanston value the need to of the space to provide access to economic devlopment. .

would support an all inclusive space with other local black businesses under one roof. September 2021, The Aux Evanston lauched their space and opend their doors to the community. As this space plans to open in Fall 2023, they are seeking support from the community to continue their mission.

Both entity&#39;s have continruted to provide support in funding grants to empower business resources, and sustain econimic growth. You too can be a power source. visit auxevanston.com

Evanston’s 3rd Annual Juneteenth Parade will be held on Saturday June 18th. Visit .kemonehendricks.com to particpate in the parade.

Based on one of Hans Christian Andersen’s most beloved stories and the classic Disney animated film, Disney’s The Little Mermaid is a classic and beautiful love story for the entire family. Tickets: musictheaterworks.com

The Evanston Lighthouse Rotary Club invites you to join us for the 8th annual Taste of Evanston on September 18, 2022 at the Charles Gates Dawes House, 225 Greenwood Street, Evanston, IL. Get your tickets early, the will sell out tasteofevanston.org

memories all in the love our

“I WOULD NOT WASTE MY LIFE IN FRICTION WHEN IT COULD BE TURNED INTO MOMENTUM.” ...

What makes an Evanston Woman,

she was asked to be President of

what characterizes her, and what

qualities would constitute such an

College for ladies, which became a

awesome label? Does she have to

be born and raised in Evanston? Is

Frances held the honor of being

there a requirement based on how

the very first Dean of Women at

long her own family has resided in

Evanston? The honest answer is,

this was short-lived as

no. Perhaps one of the most

President, at the time, Charles

figures in the history of Evanston

Fowler soon led to her resignation.

falls into NONE of the

The end of her career as a formal

then, what is it that makes Frances

a new horizon, as a temperance

Woman? Frances was born to

When looking through a wider

historical lens to examine the

America Frances was living in, it is

important to note there was a

father was a farmer and legislator,

her mother worked as a school

strife as well as rampant

teacher. In her early life, the

to Ohio and then Wisconsin.

often won through bribes or

Eventually settling in Evanston in

cheating. Women could not vote,

and despite the passing of the 15th

still struggled to exercise their

civic rights due to racial violence

non-existent, there was no safety

the country, finally returning to

for the impoverished and thousands of immigrants that migrated to the U.S. everyday. There existed an abbyys of a gap between the poor and few extremely wealthy families such as the Vanderbilts, Morgans, etc. To add to this The FDA did not exist to regulate food and medicine. It is thought that the deadly combination of deavstating poverty, corruption, and scarcity of safe medicine and medical treatment led many to turn to alcohol to heal their ailments, something which was cheap and abundant. Frances and others felt the banning of alcohol would contribute greatly to mend the many issues plaguing the American population at the time. Not only did she believe in this, she trailblazed the movement to ban the sale and consumption of alcohol, aptly called the “Temperance Movement.” In 1879 Willard became the national President of the Women’s Christian Temperance Union or (WCTU), and held this post until her death almost 20 years later. Much of Frances’ work was centered on not only prohibition, but child and family welfare, women’s voting rights, and labor reforms. Frances had a mulit-faceted agenda with the ultimate goal of simply making America a better place. For Frances, the fight for the issue of women’s voting rights and prohibition was an intersectional issue; she used her platform as a temperance activist to also fight for women’s right to vote. Willard argued that women having the right to vote would give them power and protection against the violence and

devastation alcohol and alcoholism caused both inside and out of the home. If women had the power to vote, thus they had the power to end the sale of or consumption of alcohol. She inspired countless women to join the movement and fight both for their right to vote and a safer, healthier society. Frances always saw the bigger picture, during her 19 years as WCTU president she spread the movement to the east coast and southern states, orating, mentoring, and teaching. She also

In March 2022, during her Supreme Court hearing, Judge Ketanji Brown Jackson was asked to define what a woman meant. She had no answer, earlier in the article we also struggled to define what it meant to be an ‘Evanston Woman.’ Maybe there is no single answer or definition, but we can start by looking at the life, spirit, and strength of Frances Willard, and see where we go from there.

founded the World WCTU in 1888 becoming president in 1893, working with She collaborated closely with Lady Isabel Somerset, president of the British Women&#39;s Temperance Association, whom she visited several times in the United Kingdom. “Politics is the place for women” Frances boldly proclaimed. Willard saw these issues as not just an American problem but a Global one. She truly fought to make the world a place where women had control over their futures, livelihoods, and homes. Frances Willard passed quietly in her sleep in 1898 after a lifetime of advocacy, activism, and speaking out against the oppressive powers that fought against progress and equality. Though the 18th and 19th amendment, the former banning alcohol, and the later giving women the right to vote, were passed over a decade after her death, these milestones would have been unimaginable without the ground work

The Frances Willard House was built in 1865 by James Willard is located in the heart of Evanston. This historic house has been preserved and managed with a team of professionals through the National WCTU and is a National Historic. You are invited to tour the museum. 1730 Chicago Avenue Evanston, Illinois 60201 franceswillardhouse.org

and dedication Willard gifted to us during her lifetime. EVANSTONWOMAN.COM

&quot;THE MAGIC&quot; SWEATER From the beach to after five patio dinners, Gracies has the cutest sweaters in all colors SHOP NOW ➤ Shop Gracies

To combat global poverty, social programs that not only provide cash to families — but also address psychological and social obstacles to seizing economic opportunities — can have a beneficial impact on people’s lives, according to new research from Northwestern University economists. “We need to take psychosocial aspects of social programs to fight poverty more seriously, and figure out how to integrate them effectively,” said Dean Karlan, a professor of economics and finance at the Kellogg School of Management at Northwestern and coauthor on the paper, which was published today (April 27) in Nature.

“The literature suggests mental health, aspirations and hope enable people to benefit from economic interventions and run with opportunities,” Karlan said. There were four groups in the study: a control group and three trial groups. Households in all four groups received a baseline monthly cash transfer, while the three trial groups also received an extra package of benefits that included several new components intended to improve women’s incomeearning potential: these included entrepreneurship training and a group-based savings fund in which participants could buy shares. Additionally, households in one of the trial groups received an extra lump-sum cash grant, while those in another took part in a week-long, life-skills training with role-playing, games, case studies and video viewings led by people in their communities. A third group received both the extra cash grant and the trainings. The extra cash grant and trainings together were the most effective at improving families’ economic situations after six and 18 months — but the training alone was still impactful.

Overall, the results show that government-run programs that take a multifaceted approach to Karlan and fellow study coauthor Chris Udry — a professor of economics at Kellogg — together direct combating poverty yield significant improvements in economic and psychosocial wellbeing in the Global Poverty Research Lab at Northwestern. extremely poor communities, while also improving Along with collaborators from the World Bank and the cost-effectiveness of such programs. other institutions, they worked with the government of Niger to conduct a randomized, controlled study that compared the effectiveness of “It’s about working on multiple fronts,” Karlan said. “Not just saying, ‘Here’s cash’ or ‘Here’s training.’” several different social programs for thousands of households in Niger, which is one of the world’s poorest countries.

In addition to Karlan and Udry, co-authors of the study, “Tackling Psychosocial and Capital Constraints Opens Pathways out of Poverty,” The goal of the study was understanding how include Thomas Bossuroy, Markus Goldstein, psychosocial constraints — such as a lack of role models or peer support for business efforts — might Harounan Kazianga, William Parienté, Patrick Premand, Catherine Thomas, Julia Vaillant and create barriers to seizing economic opportunities, and whether social program components designed Kelsey Wright. to address these challenges could improve overall outcomes for people living in poverty. 20 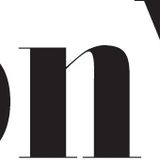