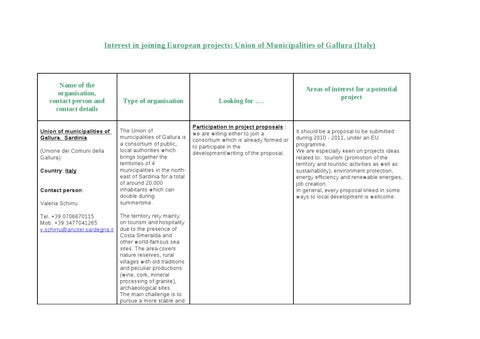 The Union of municipalities of Gallura is a consortium of public, local authorities which brings together the territories of 4 municipalities in the northeast of Sardinia for a total of around 20.000 inhabitants which can double during summertime. The territory rely mainly on tourism and hospitality due to the presence of Costa Smeralda and other world-famous sea sites. The area covers nature reserves, rural villages with old traditions and peculiar productions (wine, cork, mineral processing of granite), archaeological sites. The main challenge is to pursue a more stable and

Participation in project proposals : we are willing either to join a consortium which is already formed or to participate in the development/writing of the proposal.

Areas of interest for a potential project

It should be a proposal to be submitted during 2010 - 2011, under an EU programme. We are especially keen on projects ideas related to: tourism (promotion of the territory and touristic activities as well as sustainability), environment protection, energy efficiency and renewable energies, job creation. In general, every proposal linked in some ways to local development is wellcome.

sustainable way of local development and job creation. The Union of municipalities of Gallura can as well mobilize the other relevant social, cultural and economic stakeholders in the area. Some of these towns are involved in town twinning agreements and one of them took part in a maritime transnational cooperation project with France. The Union as a whole is also starting a number of actions o achieve european targets for energy efficiency in the framework of the Covenant of Mayors initiatives.