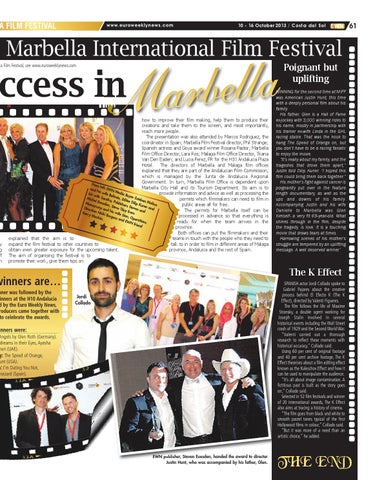 how to improve their film making, help them to produce their creations and take them to the screen, and most importantly, reach more people. The presentation was also attended by Marcos Rodriguez, the coordinator in Spain; Marbella Film Festival director, Phil Strange; Spanish actress and Goya award winner Rosana Pastor; Marbella Film Office Director, Lara Ros; Malaga Film Office Director, Triana Van Den Eaden; and Lucia Perez, PR for the H10 Andalucia Plaza Hotel. The directors of Marbella and Malaga film offices explained that they are part of the Andalucian Film Commission, which is managed by the Junta de Andalucia Regional Government. In turn, Marbella Film Office is dependent upon From left: Marbella City Hall and its Tourism Department. Its aim is to EWN and hi Med his w s wife B i provide information and advice as well as processing the a Buy eli if Mich e Sandr nda, Edi er Esteb permits which filmmakers can need to film in a, an M to el olina Mon Euesden Publishe r Dilip K public areas all for free. u eyco r , ner a s Ste Ste rp a Dire ven nd nd h ve Tiley ction a The permits for Marbella itself can be n d f is w N Kerr ife S rom y Ma icki Bur i a processed in advance so that everything is n g , chin ess a Ope . r nd E WN ations ready for when the team arrives in the frien d province. Both offices can put the filmmakers and their teams in touch with the people who they need to explained that the aim is to expand the film festival to other countries to talk to in order to film in different areas of Malaga province, Andalucia and the rest of Spain. obtain even greater exposure for the upcoming talent. The aim of organising the festival is to promote their work, give them tips on

nner was followed by the inners at the H10 Andalucia d by the Euro Weekly News, roducers came together with to celebrate the awards.

WINNING for the second time at MIFF was American Justin Hunt, this time with a deeply personal film about his family. His father, Glen is a Hall of Fame ex-jockey with 3,000 winning rides to his name, mostly in partnership with his trainer ex-wife Linda in the GHL racing stable. That was the hook to hang The Speed of Orange on, but you don’t have to be a racing fanatic to enjoy the movie. “It’s really about my family, and the tragedies that drove them apart,” Justin told Dilip Kuner. “I hoped this film could bring them back together.” His mother’s fight against cancer is poignantly put over in the feature length documentary, as well as the ups and downs of his family. Accompanying Justin and his wife Danielle to Marbella was Glen himself- a very fit 69-year-old. What shines through in the film, despite the tragedy, is love. It is a touching movie that draws tears at times. Harrowing scenes of his mother’s struggle are tempered by an uplifting message. A well deserved winner.’

SPANISH actor Jordi Collado spoke to Gabriel Pajares about the creative process behind El Efecto K (The K Effect), directed by Valenti Figueres. The film follows the life of Maxime Stransky, a double agent working for Joseph Stalin involved in several historical events including the Wall Street crash of 1929 and the Second World War. “Valenti carried out a thorough research to reflect these moments with historical accuracy,” Collado said. Using 60 per cent of original footage and 40 per cent archive footage, The K Effect theorises about a film editing effect known as the Kuleschov Effect and how it can be used to manipulate the audience. “It’s all about image contamination. A fictitious past is built as the story goes on,” Collado said. Selected in 52 film festivals and winner of 20 international awards, The K Effect also aims at tracing a history of cinema. “The film goes from black and white to smooth pastel tones typical of the first Hollywood films in colour,” Collado said. “But it was more of a need than an artistic choice,” he added.

EWN publisher, Steven Euesden, handed the award to director Justin Hunt, who was accompanied by his father, Glen. 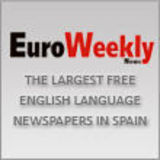