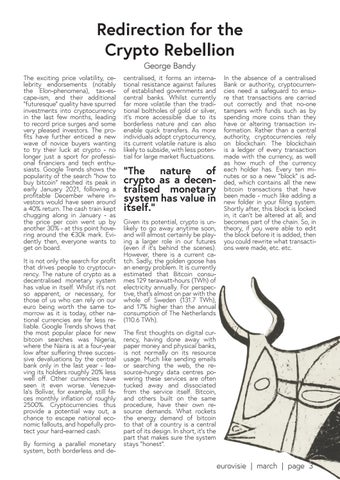 Redirection for the Crypto Rebellion George Bandy The exciting price volatility, celebrity endorsements (notably the Elon-phenomena), tax-escape-ism, and their additional “futuresque” quality have spurred investments into cryptocurrency in the last few months, leading to record price surges and some very pleased investors. The profits have further enticed a new wave of novice buyers wanting to try their luck at crypto - no longer just a sport for professional financiers and tech enthusiasts. Google Trends shows the popularity of the search “how to buy bitcoin” reached its peak in early January 2021, following a profitable December where investors would have seen around a 40% return. The cash train kept chugging along in January - as the price per coin went up by another 30% - at this point hovering around the €30k mark. Evidently then, everyone wants to get on board. It is not only the search for profit that drives people to cryptocurrency. The nature of crypto as a decentralised monetary system has value in itself. Whilst it’s not so apparent, or necessary, for those of us who can rely on our euro being worth the same tomorrow as it is today, other national currencies are far less reliable. Google Trends shows that the most popular place for new bitcoin searches was Nigeria, where the Naira is at a four-year low after suffering three successive devaluations by the central bank only in the last year - leaving its holders roughly 20% less well off. Other currencies have seen it even worse. Venezuela’s Bolívar, for example, still faces monthly inflation of roughly 2500%. Cryptocurrencies thus provide a potential way out, a chance to escape national economic fallouts, and hopefully protect your hard-earned cash. By forming a parallel monetary system, both borderless and de-

centralised, it forms an international resistance against failures of established governments and central banks. Whilst currently far more volatile than the traditional boltholes of gold or silver, it’s more accessible due to its borderless nature and can also enable quick transfers. As more individuals adopt cryptocurrency, its current volatile nature is also likely to subside, with less potential for large market fluctuations.

“The nature of crypto as a decentralised monetary system has value in itself.” Given its potential, crypto is unlikely to go away anytime soon, and will almost certainly be playing a larger role in our futures (even if it’s behind the scenes). However, there is a current catch. Sadly, the golden goose has an energy problem. It is currently estimated that Bitcoin consumes 129 terawatt-hours (TWh) of electricity annually. For perspective, that’s almost on par with the whole of Sweden (131.7 TWh), and 17% higher than the annual consumption of The Netherlands (110.6 TWh).

In the absence of a centralised Bank or authority, cryptocurrencies need a safeguard to ensure that transactions are carried out correctly and that no-one tampers with funds such as by spending more coins than they have or altering transaction information. Rather than a central authority, cryptocurrencies rely on blockchain. The blockchain is a ledger of every transaction made with the currency, as well as how much of the currency each holder has. Every ten minutes or so a new “block” is added, which contains all the new bitcoin transactions that have been made - much like adding a new folder in your filing system. Shortly after, this block is locked in, it can’t be altered at all, and becomes part of the chain. So, in theory, if you were able to edit the block before it is added, then you could rewrite what transactions were made, etc. etc.

The first thoughts on digital currency, having done away with paper money and physical banks, is not normally on its resource usage. Much like sending emails or searching the web, the resource-hungry data centres powering these services are often tucked away and dissociated from the service itself. Bitcoin, and others built on the same procedure, have their own resource demands. What rockets the energy demand of bitcoin to that of a country is a central part of its design. In short, it’s the part that makes sure the system stays “honest”. 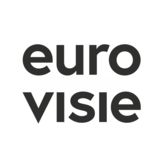