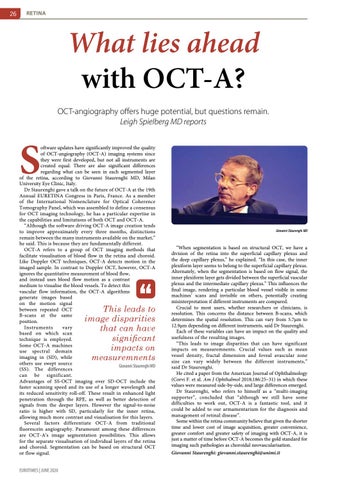 oftware updates have significantly improved the quality of OCT-angiography (OCT-A) imaging systems since they were first developed, but not all instruments are created equal. There are also significant differences regarding what can be seen in each segmented layer of the retina, according to Giovanni Staurenghi MD, Milan University Eye Clinic, Italy. Dr Staurenghi gave a talk on the future of OCT-A at the 19th Annual EURETINA Congress in Paris, France. As a member of the International Nomenclature for Optical Coherence Tomography Panel, which was assembled to define a consensus for OCT imaging technology, he has a particular expertise in the capabilities and limitations of both OCT and OCT-A. “Although the software driving OCT-A image creation tends to improve approximately every three months, distinctions remain between the many instruments available on the market,” he said. This is because they are fundamentally different. OCT-A refers to a group of OCT imaging methods that facilitate visualisation of blood flow in the retina and choroid. Like Doppler OCT techniques, OCT-A detects motion in the imaged sample. In contrast to Doppler OCT, however, OCT-A ignores the quantitative measurement of blood flow, and instead uses blood flow motion as a contrast medium to visualise the blood vessels. To detect this vascular flow information, the OCT-A algorithms generate images based on the motion signal between repeated OCT B-scans at the same position. Instruments vary based on which scan technique is employed. Some OCT-A machines use spectral domain imaging in (SD), while others use swept source Giovanni Staurenghi MD (SS). The differences can be significant. Advantages of SS-OCT imaging over SD-OCT include the faster scanning speed and its use of a longer wavelength and its reduced sensitivity roll-off. These result in enhanced light penetration through the RPE, as well as better detection of signals from the deeper layers. However the signal-to-noise ratio is higher with SD, particularly for the inner retina, allowing much more contrast and visualisation for this layers. Several factors differentiate OCT-A from traditional fluorescein angiography. Paramount among these differences are OCT-A’s image segmentation possibilities. This allows for the separate visualisation of individual layers of the retina and choroid. Segmentation can be based on structural OCT or flow signal.

“When segmentation is based on structural OCT, we have a division of the retina into the superficial capillary plexus and the deep capillary plexus,” he explained. “In this case, the inner plexiform layer seems to belong to the superficial capillary plexus. Alternately, when the segmentation is based on flow signal, the inner plexiform layer gets divided between the superficial vascular plexus and the intermediate capillary plexus.” This influences the final image, rendering a particular blood vessel visible in some machines’ scans and invisible on others, potentially creating misinterpretation if different instruments are compared. Crucial to most users, whether researchers or clinicians, is resolution. This concerns the distance between B-scans, which determines the spatial resolution. This can vary from 5.7μm to 12.9μm depending on different instruments, said Dr Staurenghi. Each of these variables can have an impact on the quality and usefulness of the resulting images. “This leads to image disparities that can have significant impacts on measuremnents. Crucial values such as mean vessel density, fractal dimension and foveal avascular zone size can vary widely between the different instruments,” said Dr Staurenghi. He cited a paper from the American Journal of Ophthalmology (Corvi F. et al. Am J Ophthalmol 2018;186:25–31) in which these values were measured side-by-side, and large differences emerged. Dr Staurenghi, who refers to himself as a “multi-imaging supporter”, concluded that “although we still have some difficulties to work out, OCT-A is a fantastic tool, and it could be added to our armamentarium for the diagnosis and management of retinal disease”. Some within the retina community believe that given the shorter time and lower cost of image acquisition, greater convenience, greater comfort and greater safety of imaging with OCT-A, it is just a matter of time before OCT-A becomes the gold standard for imaging such pathologies as choroidal neovascularisation. Giovanni Staurenghi: giovanni.staurenghi@unimi.it 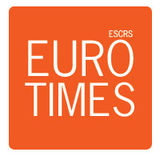