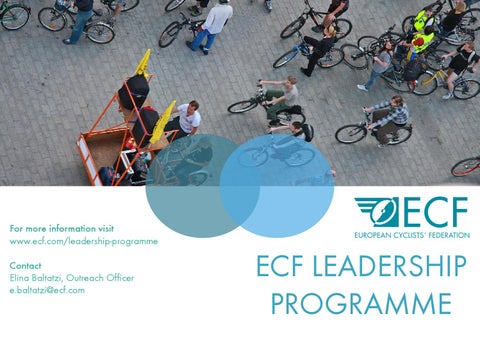 Finnish Cyclists’ Federation (FCF) Situation before Leadership Programme participation: The cycling advocacy movement in Finland was active with a large number of volunteers working to promote cycling at a local level. However, people working on local level had limited resources and a platform for national collaboration was missing. Desired change and current outcome: The local cycling associations wanted to improve national level cycling advocacy by uniting the local organizations under one roof. The funding from the Leadership Programme helped to establish the Finnish Cyclists' Federation, built an effective strategy and communications plan for it and to create the base for its funding. Today the new federation has two employees and represents over 2,000 cyclists across the country. The FCF has great plans for the future. The federation has recently received funding from Finnish Road Administration to expand its organization to all major cities and to promote winter cycling. FCF is also planning to establish its own industry club. A lot has also been done in terms of lobbying. FCF is currently running a “Pedal Election Café” - campaign related to the 2015 parliament elections. The idea is to make candidates discuss issues related to transport policy and to advocate FCF’s goals to the political parties.

Bulgarian Cycling Association (BCA) Situation before Leadership Programme participation: Before entering the LP, BCA was a small organization ran by volunteers and it lacked financial support. BCA had already worked to identify the main obstacles to developing cycling in Bulgaria but the lack of capacity prevented the organization from finding solutions to these issues. Desired change and current outcome: BCA wanted to grow as an organization by attracting new members from two main target groups: the everyday cyclists and the professional audience. To attract the first target group BCA now organizes weekly meetings with supporters and members. To reach the second target group that consist of cycling industry, employers, politicians and decision makers BCA started an initiative called Velolobby which aims to create a platform for dialogue between these stakeholders. The aim is to assure multilevel support for cycling.

“The biggest help form the Leadership Programme was its concept – the cycling industry supporting cycling NGOs. We made it clear to the Bulgarian cycling industry that all our activities will result in increasing the cycling market and therefore they should support us as well. We do our best to be visible especially to the decision makers and the professional audience. “

Czech Environmental Partnership Foundation (Nadace Partnerství) Situation before Leadership Programme participation: Before joining the LP, Nadace Partnerství focused on cycle tourism and greenways. Now the organization is more involved in cycling advocacy than before. Desired change and current outcome: Nadace Partnerství wants to bring Czech cycling organization together under one umbrella federation. This is made challenging by the fact that most of these organizations are not traditional membership organizations and some of them are not even legal entities. With the support and best practices gained from the Leadership Programme Nadace Partnerství works to establish a national coalition. Nadace Partnerství has also improved its cycling advocacy work and runs several successful campaigns at local and national level such as the Bike2Work campaign in Brno and a City Bike Point project related to first aid services for cyclists in larger cities across the Czech Republic.

“With the Leadership Programme we are more and more involved in cycling. National campaigns such as Bike2Work have expanded to 25 cities already, our Traffic Calming and Safe Routes to Schools initiative attracts more cities and schools and the 2-3 large cycle events are gaining momentum. However, creating a nationwide organization goes far beyond these successes and is asking for collaborative efforts of several organizations.”

FIAB - Federazione Italiana Amici della Bicicletta (Federation of Friends of the Bicycle in Italy) Situation before Leadership Programme participation: Before joining the Leadership Programme, FIAB had fewer members and less media exposure. Desired change and current outcome: FIAB wanted a new imagine that would respond to younger people’s demands on sustainable mobility. With the help of LP funding FIAB hired a communicator who builds creative campaigns to improve the perception of FIAB among Italian cyclists and to spread awareness among Italian politicians about the urgency of their commitment for a change in the mobility patterns. FIAB has also succesfully increased its pesence in the media and social networks.

“Any communication campaign needs appropriate resources. Without financial help we can hardly find resource for this kind of work. Communication is a key element for membership growth. “

Cyclist.ie – Ireland’s National Cycling Lobby Group Situation before Leadership Programme participation: Cyclist.ie was a loose alliance of several cycle campaigning organizations in Ireland. The member groups varied enormously in size and in their level of organization. All work was conducted on a voluntary basis with no professional coordinating dimension. In regard to decision-making, there was no 'Executive' which met on a regular basis. Furthermore, Cyclist.ie had no formal funding to facilitate it in its transition into being a 'much more grown-up' organization. Desired change and current outcome: Cyclist.ie wished to improve its effectiveness as an advocacy body with better coordination of local level lobbying activities and stronger national level lobbying. Organizationally, Cyclist.ie wanted a better structure and a portfolio of funders. Cyclisti.ie now has far better coordination of activities at a local level, and its member groups have succeeded in getting appointed to the most important local decision-making transport committees. Cyclist.ie’s national level lobbying has stepped up a gear as the organization engages with politicians and senior officials in health, transport and tourism. In short, Cyclist.ie is now shaping policy and practice at local and national levels. Internally, Cyclits.ie is better organized as regards to decision-making and communications. It is now a limited company, building on the solid organizational and legal foundations of its largest member group, Dublin Cycling Campaign. Cyclist.ie now also has a fundraising plan and has already succeeded in bringing the main players of the Irish Bicycle Importers behind it.

“The ECF Leadership Programme enabled Cyclist.ie to employ a part-time National Cycling Coordinator (NCC) through a strategic partnership with An Taisce, The National Trust for Ireland. In essence, having a NCC has improved coordination and cohesion within the network. Through being based within An Taisce, a statutory consultee, and having access to all of the planning applications they receive, the NCC is able to alert local groups all around Ireland of the statutory processes underway and support them in making timely, well informed, strong submissions on various transport schemes and issues. This is making a difference on the ground. Furthermore, the knowledge of all of these processes feeds into more effective national level lobbying. In short, we are more clued-in when meeting these figures through the work of the NCC.”

ConBici – Coordinatora En Defensa De La Bici Situation before Leadership Programme participation: The political arena in Spain is transforming from a 2 party scenario to a system of 4 middle sized parties. This change offers opportunity and challenges: more political parties to reach but also more diversity and more pluralized debate. Cycling stands up as an opportunity to improve two social aspects: the lack of jobs and the quality of life in cities. Desired change and current outcome: ConBici wanted to improve its lobbying and advocacy work. With the financial support of the LP they are successfully raising awareness about the benefits of cycling among the Spanish politicians. Aim of ConBici’s short term, high impact advocacy is to include proposals from their National Cycling Plan in the parties’ manifestos for the regional and especially national elections. To gain additional support ConBici also involves the Cyclists Group of the Parliament in the electoral debate.

“We are still at the beginning of the Leadership Programme, but we think not only the financial support has been important in ensuring that our organisation has professional staff but also the advice and know-how from the ECF staff members has been important”.

Cykelfrämjandet, The Cycling Promotion in Sweden Situation before Leadership Programme participation: In the past Cykelfrämjande was mainly involved in facilitating cycle tourism but now the association works to promote cycling on a wider spectrum ranging from political advocacy to industry cooperation. Desired change and current outcome: Cykelfrämjandet wanted to improve its advocacy work by placing an office in Stockholm and by starting a section for public relations and marketing. This would make it easier for them to meet with politicians and other advocacy organisations seated in the capital. Furthermore, Cykelfrämjandet wanted to establish an umbrella organisation for national cycling associations to improve cooperation with other stakeholders. Cykelfrämjandet has since had ongoing contact with the members of the Swedish parliament and have been consulted in relation to national cycling strategies. Cykelfrämjandet has also deepened its engagement with other cycling relevant stakeholders. It recently established an umbrella organisation with participants from bike racing, bicycle industry, tourism and environmental sectors. Last year Cykelfrämjandet also launched an app for smart phones, together with Sweden’s biggest insurance company and the bicycle industry and they are planning on launching an update for the app.

“We believe participating in the ECF Leadership Programme helps to promote biking in Sweden and reach younger persons, which leads to a lot of new members and a bigger impact on the politics.”

AVK – Kyiv Cyclists’ Association, Ukraine Situation before Leadership Programme participation: AVK was a group of motivated cycling advocates who received a grant from ECF’s Leadership Programme in 2011 to professionalize their organization. Desired change and current outcome: AVK wanted to grow in members and extend its work on national level. This they wanted to do by concentrating on capacity building of local NGOs and gaining influence as an advisor to city councils on cycling development plans. Considering the specific context of Ukraine AVK’s achievements are remarkable. AVK has played a key role in advising 5 cities across Ukraine in the design of cycling development programmes. Leading on from this, they have also been instrumental in recommendations to the Ministry of Regional Development on the planning of cycling infrastructure. AVK has also managed to secure 500.000 Euro funding on cycling infrastructure from the city of Kiev. This amount is expected to be enough for the first stage of the Kyiv cycling plan implementation among which there are long cycling routes across the city. To ensure knowledge dissemination on the regional level, AVK has also successfully organised Veloforum in 2014, the largest regional cycling conference with over 150 participants from 7 countries.

“The Leadership Programme grant and capacity building assistance has helped AVK reach its organizational development goal of tripling its numbers to 300. Helping AVK build our advocacy capacity has more than paid off with our now strong voice harbouring trust from the local population and in general boosting the greater societal interest in cycling.”

Radlobby Österreich (Austrian Bicycle Lobby) Situation before Leadership Programme participation: After the founding of Radlobby Österreich, the he federation of all Austrian bicycle advocacy association, in 2013 the organisation had a small but active team that required more resources to scale up the its activities. Desired change and current outcome: After successfully developing and implementing a modern membership campaign concept, Radlobby Österreich wanted to hire additional staff to be better able to focus on bicycle advocacy. It also wished to strengthen cooperation with the federation’s regional groups and the larger number of volunteers it has across the country The increase of qualified staff has allowed Radlobby Österreich to improve the education, coaching and coordination of its members and volunteers. To empower its members, Radlobby Österreich has organised several workshops to form a common strategy. This in turn has up-scaled its advocacy work. Through its political online platform "Radpublik", Radlobby Österreich successfully promotes the status of cycling in national transport politics and it currently uses the platform for its campaign to improve transport possibilities of bicycles on trains. Radlobby Österreich also recently presented its "Bicycle Strategy for Austria" to the political parties. This strategy was based on the public voting via the "Radpublik" –platform. 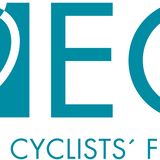