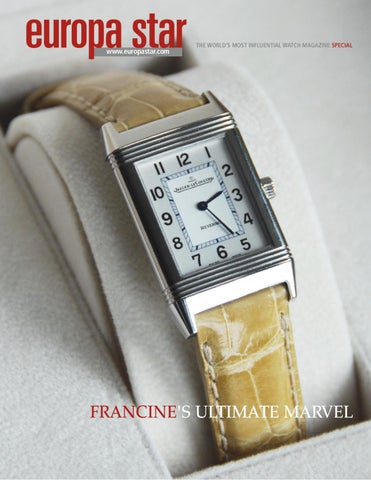 Thomas Edison passed away, the Empire State Building in New York was finally finished (at a cost of $40 million), Al Capone was sentenced to 17 years in prison, Josephine Baker sang J’ai deux amours, Charlie Chaplin presented City Lights, and Marconi, inventor of the radio, provided Radio Vatican with the most powerful short-wave radio in the world. In British India, which had at the time a little more than 350 million inhabitants, Mahatma Gandhi signed an agreement with the viceroy, Lord Irwin, giving the subcontinent’s poor the right to collect salt themselves. At the same time, also in Bombay, officers in the British army, adept at polo, were wearing a new and completely amazing watch—the Reverso. As its name indicates, it was a revolutionary and elegant construction that allowed the case of the watch to be swivelled in order to protect the dial from possible shocks and hits

received during their rigorous games. A small detail quickly became very important—the back of this rotated case offered not only impeccable protection for the watch but it also had a lovely polished surface that allowed for personalisation in any number of ways. The man who presented this Reverso with its Art Deco styling was César de Trey—a wealthy Swiss businessman who had recently become involved in the promotion of fine watches. One year earlier, while travelling in India, one of the English officers gave him his watch that had sadly been broken during a furious polo match. The officer challenged César de Trey to try and find a timekeeper that would be resistant to such shocks and breakage during the game. Upon his return to Switzerland, de Trey made contact with a watchmaker that he knew well, Jacques-David LeCoultre. The manufacture that LeCoultre directed was one of the most complete and modern in existence, and designed and produced already nearly 200 different chronograph calibres, in addition to being responsible for many technical innovations in the domain of mechanical timekeepers and production. Jacques-David LeCoultre generally worked with a Parisian brand called Jaeger.

Together, they had already designed, in 1925, the revolutionary Duoplan watch. This timepiece combined extreme miniaturisation and technical excellence, thanks to the construction of the movement on two stepped planes, which let the designers keep a large balance in spite of the small size of the piece. Working together, LeCoultre and Jaeger met the requirements of César de Trey with a case capable of swivelling into itself so that only bare metal would be exposed to any potential shocks. On March 4, 1931, the engineer Alfred Chauvot, to whom they entrusted the implementation of the project, submitted a patent for a watch “able to pivot on itself by sliding into its support”. A legend was born—the Reverso. But in 1931, no one yet knew that these first steps would be the start of a great saga. Rapidly, this watch attracted a lot of attention, which went way beyond that of the polo-playing British officers. In fact, the Reverso, while it perfectly protects the watch—the reason for its invention—is also a magnificent object in itself. Its pure and geometric forms embodied the modern spirit of Art Deco, the style movement that would give birth to what we today call ‘design’.

The Reverso would go on to enjoy extraordinary success, greatly enhanced by the infinite possibilities to personalise the case. Associated with both technology and elegant sophistication, the Reverso is also an ‘emotional’ watch. The steel or gold back of the timepiece is like a ‘clean slate’, which anyone can engrave or decorate according to his or her own wishes. Already in the first years of existence, the Reverso was used in this way and, for millions of its loyal fans, it became a truly unique piece.

A few years before the Reverso celebrated its 50th anniversary, on 1 January 1978 to be precise, Francine Papaux started working for the world’s most influential watch magazine, Europa Star. Although this was over thirty years ago, the economic situation could seem almost the same as today. The price of gold reached an all-time high (at $200 an ounce, compared with its all-time high this year of $1900) and the US dollar plunged to a record low against many European currencies. Other facts, however, clearly show how things have changed since: The “Space Invaders”

TESTIMONIALS At the beginning of the 1930s, King Edward VIII of Britain had his family crest engraved on his Reverso, as did the Prince of Denmark who, in a letter dated 1934, declared that his Reverso “had always given great satisfaction even after being subjected to all the bad weather in southern Morocco”. The famous American aviator, Amelia Earhart, had engraved upon her Reverso the itinerary of her first flight from Mexico to New York, which she made on May 8, 1935. British gentlemen decorated their watches with the coat of arms of the very select British Racing Drivers’ Club. The Reverso watches belonging to the elite Ghurkha Rifles, the personal guards of the Maharajah of Jaipur, as well as those belonging to the Royal Sussex Regiment and the students at Cranwell College of the Royal Air Force, all were decorated with the colours of their units. Young English students also wore their Reverso pieces, engraved with the coats of arms of Eton College, Harrow School, or Saint Andrews University. Other owners of the famous watch opted for engravings that represented more personal choices, such as a hut on a desert island, the map of a favourite country, or even erotic scenes. Europa Star’s experienced production manager now becomes the latest testimonial to join this illustrious list.

game triggered the boom in video games, the first cellular mobile telephone network was launched and the world’s first test-tube baby was born. It is also hard to believe that this is the year in which production of the legendary Volkswagen Beetle was ceased. And the films Grease and Saturday Night Fever released this year, as well as their accompanying soundtracks featuring songs by the Bee Gees, came to epitomise the era.

Over thirty years, 50 dedicated Reverso calibres and over 200 editions of Europa Star later, Francine Papaux’s own personal Reverso has been produced to celebrate her uninterrupted 34-year presence at the magazine. While the Reverso has in the meantime been elevated to a cult object, Francine has witnessed the evolution of the printing world to incorporate the latest digital technologies.

Both her Reverso and her work at Europa Star have become anchored in history. The Reverso gave birth to a branch of watchmaking with totally unique characteristics. From the original art of reversing itself, it has created more than a thousand uses, marrying all its functions and combining several faces on the same ‘body’. It is associated with the grand mastery of watch complications and with the jewellery arts. It has passed between the hands of creative artisans; it has been illuminated with miniature painting; and it has been enhanced with enamel. Now it celebrates one of the stalwarts of the Europa Star team, who leaves after three decades of service to enjoy a well-deserved retirement. Yet, the Reverso has never forgotten its sporty origins and its collection has expanded with robust chronographs driven by high performance movements adaptable to all condi-

tions, even the most extreme. In 2006, in the archives of the brand, a second drawing of the case was found—a square one—that was registered at the same time as the famous rectangular case. Designed in 1931, the square case was never made until the Jaeger-LeCoultre Manufacture launched it under the title of Reverso Squadra, a resolutely sporty name. Among all the watches that were specifically created for this year’s anniversary, two models offer special testimony to the exceptional forms followed during the Reverso chronicle: the latest timepiece, and the faithful re-edition of the very first timepiece.

complication (in this case the minute repeater), refined technical prowess (a totally unique ‘curtain’), and stylistic excellence (timeless elegance in its design). Not only can we pivot this watch and hide one of its dials, but we can also conceal one of the dials by sliding a curtain over it made up of 16 slats in 18-carat white gold, each measuring 2.34 mm in width. And—it is here that the decorative arts join Haute Horlogerie—when the curtain is moved, it directly winds and activates the minute repeater. At the moment the watch stops the musical countdown of the hours, quarterhours and minutes on the gongs, the curtain returns to its original position and conceals the dial once more. Clearly, behind the beauty and poetry of this mechanism is a high degree of complexity: the set of 16 slats functions as a chain directly acting on the minute repeater mechanism. The sliding of the curtain winds the spring for the repeater and activates the chime, thus transforming a lateral motion into a rotational motion. To this highly sophisticated model, incorporating both the case design (comprised of 270 component parts) and the micro-mechanical curtain, can be added the high complexity of the watch itself. The new Jaeger-LeCoultre 944 Calibre that equips the Reverso Répétition Minutes à Rideau is the latest example in a long line of sounding watches created by the brand—in fact, more than 200 different versions have been developed by Jaeger-LeCoultre in its history. This calibre stems from the first rectangular repeater watch, a Reverso dating to 1994, which was particularly difficult to develop. It is equipped with all the advances, many of them spectacular, during the brand’s experience in this delicate domain. Whether it is about the design of the gong itself (it has a square cross-section, contrary to the normal round gongs, and is made of a very special alloy; it is produced entirely in one piece from the heel to the finely ending wire), or the dual-axis system of hammers with a special joint on a movable arm that increases

the energy delivered, or the centrifugal governor fitted with a flywheel to control the timing of the mechanical operations throughout the striking action, or finally the original system for activating the repeater by opening the curtain, everything comes together to make this Reverso a summary of the brand’s savoir-faire and timekeeping mastery. The team’s designers, managed by Janek Deleskiewicz, an undeniable expert in all the stylistic evolutions of the Reverso, chose a very contemporary dial for the minute repeater side, one that underscores the high technology of the case, with its undulating lines, that reveals nearly the entire mechanism. The other side of the watch, which also displays hours and minutes, has an open-worked dial whose bridges are decorated with wave motifs while the second side is engraved with geometric motifs, inspired by the famous Doge’s Palace in Venice, one of the chosen cities of the Reverso.

the owner, from a simple engraving of initials or a favourite number or symbol to the reproduction of a more complex motif, ad even including enamelling or stone-setting. New character fonts are offered besides the English and Art Deco letters and even touches of colour can be added. In keeping with the classic design of the timepiece Francine Papaux’s Reverso has been personalised with a discreet engraving of her initials. 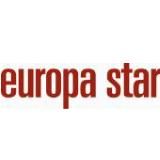