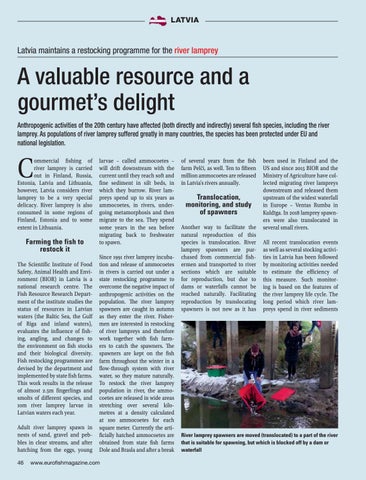 Latvia maintains a restocking programme for the river lamprey

A valuable resource and a gourmetâ&amp;#x20AC;&amp;#x2122;s delight Anthropogenic activities of the 20th century have affected (both directly and indirectly) several ďŹ sh species, including the river lamprey. As populations of river lamprey suffered greatly in many countries, the species has been protected under EU and national legislation.

Farming the fish to restock it The Scientific Institute of Food Safety, Animal Health and Environment (BIOR) in Latvia is a national research centre. The Fish ResourceÂ Research Department of the institute studies the status of resources in Latvian waters (the Baltic Sea, the Gulf of Riga and inland waters), evaluates the influence of fishing, angling, and changes to the environment on fish stocks and their biological diversity. Fish restocking programmes are devised by the department and implemented by state fish farms. This work results in the release of almost 2.5m fingerlings and smolts of different species, and 10m river lamprey larvae in Latvian waters each year. Adult river lamprey spawn in nests of sand, gravel and pebbles in clear streams, and after hatching from the eggs, young 46

larvae â&amp;#x20AC;&amp;#x201C; called ammocoetes â&amp;#x20AC;&amp;#x201C; will drift downstream with the current until they reach soft and fine sediment in silt beds, in which they burrow. River lampreys spend up to six years as ammocoetes, in rivers, undergoing metamorphosis and then migrate to the sea. They spend some years in the sea before migrating back to freshwater to spawn. Since 1991 river lamprey incubation and release of ammocoetes in rivers is carried out under a state restocking programme to overcome the negative impact of anthropogenic activities on the population. The river lamprey spawners are caught in autumn as they enter the river. Fishermen are interested in restocking of river lampreys and therefore work together with fish farmers to catch the spawners. The spawners are kept on the fish farm throughout the winter in a flow-through system with river water, so they mature naturally. To restock the river lamprey population in river, the ammocoetes are released in wide areas stretching over several kilometres at a density calculated at 100 ammocoetes for each square meter. Currently the artificially hatched ammocoetes are obtained from state fish farms Dole and Brasla and after a break

of several years from the fish farm PelÄ&amp;#x20AC;i, as well. Ten to fifteen million ammocoetes are released in Latviaâ&amp;#x20AC;&amp;#x2122;s rivers annually.

Translocation, monitoring, and study of spawners Another way to facilitate the natural reproduction of this species is translocation. River lamprey spawners are purchased from commercial fishermen and transported to river sections which are suitable for reproduction, but due to dams or waterfalls cannot be reached naturally. Facilitating reproduction by translocating spawners is not new as it has

been used in Finland and the US and since 2015 BIOR and the Ministry of Agriculture have collected migrating river lampreys downstream and released them upstream of the widest waterfall in Europe â&amp;#x20AC;&amp;#x201C; Ventas Rumba in KuldÄŚga. In 2018 lamprey spawners were also translocated in several small rivers. All recent translocation events as well as several stocking activities in Latvia has been followed by monitoring activities needed to estimate the efficiency of this measure. Such monitoring is based on the features of the river lamprey life cycle. The long period which river lampreys spend in river sediments R. Medne

ommercial fishing of river lamprey is carried out in Finland, Russia, Estonia, Latvia and Lithuania, however, Latvia considers river lamprey to be a very special delicacy. River lamprey is also consumed in some regions of Finland, Estonia and to some extent in Lithuania.

River lamprey spawners are moved (translocated) to a part of the river that is suitable for spawning, but which is blocked off by a dam or waterfall

Featuring Turkey's and Latvia's fisheries and aquaculture sector, this issue also looks at opportunities for fisheries as the Arctic ice melts.