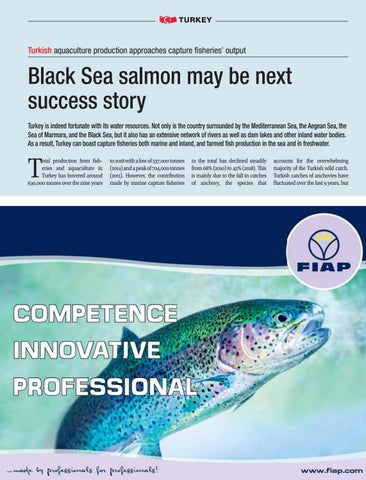 Black Sea salmon may be next success story Turkey is indeed fortunate with its water resources. Not only is the country surrounded by the Mediterranean Sea, the Aegean Sea, the Sea of Marmara, and the Black Sea, but it also has an extensive network of rivers as well as dam lakes and other inland water bodies. As a result, Turkey can boast capture ďŹ sheries both marine and inland, and farmed ďŹ sh production in the sea and in freshwater.

otal production from fisheries and aquaculture in Turkey has hovered around 630,000 tonnes over the nine years

accounts for the overwhelming majority of the Turkish wild catch. Turkish catches of anchovies have fluctuated over the last 9 years, but

Featuring Turkey's and Latvia's fisheries and aquaculture sector, this issue also looks at opportunities for fisheries as the Arctic ice melts.