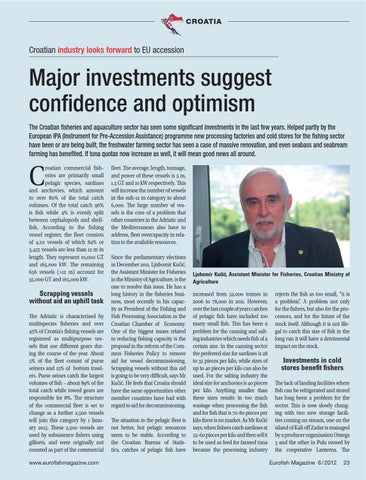 Major investments suggest conﬁdence and optimism The Croatian ﬁsheries and aquaculture sector has seen some signiﬁcant investments in the last few years. Helped partly by the European IPA (Instrument for Pre-Accession Assistance) programme new processing factories and cold stores for the ﬁshing sector have been or are being built, the freshwater farming sector has seen a case of massive renovation, and even seabass and seabream farming has beneﬁted. If tuna quotas now increase as well, it will mean good news all around.

roatian commercial fisheries are primarily small pelagic species, sardines and anchovies, which amount to over 80 of the total catch volumes. Of the total catch 96 is fish while 4 is evenly split between cephalopods and shellfish. According to the fishing vessel register, the fleet consists of 4,111 vessels of which 84 or 3,455 vessels are less than 12 m in length. They represent 10,000 GT and 165,000 kW. The remaining 656 vessels (>12 m) account for 35,000 GT and 165,000 kW.

Scrapping vessels without aid an uphill task The Adriatic is characterised by multispecies fisheries and over 45 of Croatia’s fishing vessels are registered as multipurpose vessels that use different gears during the course of the year. About 5 of the fleet consist of purse seiners and 15 of bottom trawlers. Purse seines catch the largest volumes of fish – about 89 of the total catch while towed gears are responsible for 8. The structure of the commercial fleet is set to change as a further 2,500 vessels will join this category by 1 January 2015. These 2,500 vessels are used by subsistence fishers using gillnets, and were originally not counted as part of the commercial www.eurofishmagazine.com

fleet. The average, length, tonnage, and power of these vessels is 5 m, 1.5 GT and 10 kW respectively. This will increase the number of vessels in the sub-12 m category to about 6,000. The large number of vessels is the core of a problem that other countries in the Adriatic and the Mediterranean also have to address, fleet overcapacity in relation to the available resources. Since the parliamentary elections in December 2011, Ljubomir Kucˇic´, the Assistant Minister for Fisheries in the Ministry of Agriculture, is the one to resolve this issue. He has a long history in the fisheries business, most recently in his capacity as President of the Fishing and Fish Processing Association in the Croatian Chamber of Economy. One of the biggest issues related to reducing fishing capacity is the proposal in the reform of the Common Fisheries Policy to remove aid for vessel decommissioning. Scrapping vessels without this aid is going to be very difficult, says Mr Kucˇic´. He feels that Croatia should have the same opportunities other member countries have had with regard to aid for decommissioning. The situation in the pelagic fleet is not better, but pelagic resources seem to be stable. According to the Croatian Bureau of Statistics, catches of pelagic fish have

rejects the fish as too small, “it is a problem”. A problem not only for the fishers, but also for the processors, and for the future of the stock itself. Although it is not illegal to catch this size of fish in the long run it will have a detrimental impact on the stock.

Investments in cold stores beneﬁt ﬁshers The lack of landing facilities where fish can be refrigerated and stored has long been a problem for the sector. This is now slowly changing with two new storage facilities coming on stream, one on the island of Kali off Zadar is managed by a producer organisation Omega 3 and the other in Pula owned by the cooperative Lanterna. The Eurofish Magazine 6 / 2012

In this issue the fisheries sector in Croatia and Spain are profiled. We also look at DNA analysis in the our technology section.

In this issue the fisheries sector in Croatia and Spain are profiled. We also look at DNA analysis in the our technology section.