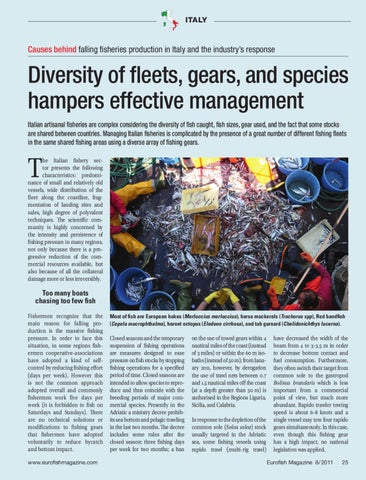 Causes behind falling fisheries production in Italy and the industryâ&amp;#x20AC;&amp;#x2122;s response

Diversity of fleets, gears, and species hampers effective management Italian artisanal fisheries are complex considering the diversity of fish caught, fish sizes, gear used, and the fact that some stocks are shared between countries. Managing Italian fisheries is complicated by the presence of a great number of different fishing fleets in the same shared fishing areas using a diverse array of fishing gears.

he Italian fishery sector presents the following characteristics: predominance of small and relatively old vessels, wide distribution of the fleet along the coastline, fragmentation of landing sites and sales, high degree of polyvalent techniques. The scientific community is highly concerned by the intensity and persistence of fishing pressure in many regions, not only because there is a progressive reduction of the commercial resources available, but also because of all the collateral damage more or less irreversibly.

Too many boats chasing too few fish Fishermen recognize that the main reason for falling production is the massive fishing pressure. In order to face this situation, in some regions fishermen cooperative-associations have adopted a kind of selfcontrol by reducing fishing effort (days per week). However this is not the common approach adopted overall and commonly fishermen work five days per week (it is forbidden to fish on Saturdays and Sundays). There are no technical solutions or modifications to fishing gears that fishermen have adopted voluntarily to reduce bycatch and bottom impact. www.eurofishmagazine.com

Closed seasons and the temporary suspension of fishing operations are measures designed to ease pressure on fish stocks by stopping fishing operations for a specified period of time. Closed seasons are intended to allow species to reproduce and thus coincide with the breeding periods of major commercial species. Presently in the Adriatic a ministry decree prohibits sea bottom and pelagic trawling in the last two months. The decree includes some rules after the closed season: three fishing days per week for two months; a ban

on the use of towed gears within 4 nautical miles of the coast (instead of 3 miles) or within the 60 m isobaths (instead of 50 m); from January 2011, however, by derogation the use of trawl nets between 0.7 and 1.5 nautical miles off the coast (at a depth greater than 50 m) is authorised in the Regions Liguria, Sicilia, and Calabria. In response to the depletion of the common sole (Solea solea) stock usually targeted in the Adriatic sea, some fishing vessels using rapido trawl (multi-rig trawl)

have decreased the width of the beam from 4 to 3-3.5 m in order to decrease bottom contact and fuel consumption. Furthermore, they often switch their target from common sole to the gastropod Bolinus brandaris which is less important from a commercial point of view, but much more abundant. Rapido trawler towing speed is about 6-8 knots and a single vessel may tow four rapido gears simultaneously. In this case, even though this fishing gear has a high impact, no national legislation was applied. Eurofish Magazine 6/ 2011

This Eurofish Magazine features Italy and Azerbaijan. The aquaculture section looks at insurances as part of risk management.