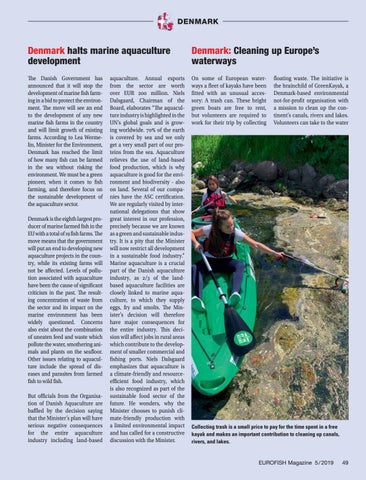 The Danish Government has announced that it will stop the development of marine fish farming in a bid to protect the environment. The move will see an end to the development of any new marine fish farms in the country and will limit growth of existing farms. According to Lea Wermelin, Minister for the Environment, Denmark has reached the limit of how many fish can be farmed in the sea without risking the environment. We must be a green pioneer, when it comes to fish farming, and therefore focus on the sustainable development of the aquaculture sector.

On some of European waterways a fleet of kayaks have been fitted with an unusual accessory: A trash can. These bright green boats are free to rent, but volunteers are required to work for their trip by collecting

Denmark is the eighth largest producer of marine farmed fish in the EU with a total of 19 fish farms. The move means that the government will put an end to developing new aquaculture projects in the country, while its existing farms will not be affected. Levels of pollution associated with aquaculture have been the cause of significant criticism in the past. The resulting concentration of waste from the sector and its impact on the marine environment has been widely questioned. Concerns also exist about the combination of uneaten feed and waste which pollute the water, smothering animals and plants on the seafloor. Other issues relating to aquaculture include the spread of diseases and parasites from farmed fish to wild fish. But officials from the Organisation of Danish Aquaculture are baffled by the decision saying that the Ministerâ&amp;#x20AC;&amp;#x2122;s plan will have serious negative consequences for the entire aquaculture industry including land-based

aquaculture. Annual exports from the sector are worth over EUR 200 million. Niels Dalsgaard, Chairman of the Board, elaborates â&amp;#x20AC;&amp;#x153;The aquaculture industry is highlighted in the UNâ&amp;#x20AC;&amp;#x2122;s global goals and is growing worldwide. 70ď&amp;#x2122;&amp;#x201A; of the earth is covered by sea and we only get a very small part of our proteins from the sea. Aquaculture relieves the use of land-based food production, which is why aquaculture is good for the environment and biodiversity - also on land. Several of our companies have the ASC certification. We are regularly visited by international delegations that show great interest in our profession, precisely because we are known as a green and sustainable industry. It is a pity that the Minister will now restrict all development in a sustainable food industry.â&amp;#x20AC;? Marine aquaculture is a crucial part of the Danish aquaculture industry, as 2/3 of the landbased aquaculture facilities are closely linked to marine aquaculture, to which they supply eggs, fry and smolts. The Ministerâ&amp;#x20AC;&amp;#x2122;s decision will therefore have major consequences for the entire industry. This decision will affect jobs in rural areas which contribute to the development of smaller commercial and fishing ports. Niels Dalsgaard emphasizes that aquaculture is a climate-friendly and resourceefficient food industry, which is also recognized as part of the sustainable food sector of the future. He wonders, why the Minister chooses to punish climate-friendly production with a limited environmental impact and has called for a constructive discussion with the Minister.

floating waste. The initiative is the brainchild of GreenKayak, a Denmark-based environmental not-for-profit organisation with a mission to clean up the continentâ&amp;#x20AC;&amp;#x2122;s canals, rivers and lakes. Volunteers can take to the water

Collecting trash is a small price to pay for the time spent in a free kayak and makes an important contribution to cleaning up canals, rivers, and lakes.

This Eurofish Magazine issue features the fisheries and aquaculture industry in Albania and Denmark and the aquaculture section looks at the increasing demand for fish welfare while the species profile is on African catfish.