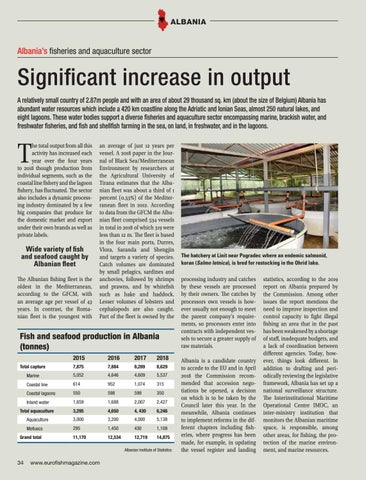 SigniďŹ cant increase in output A relatively small country of 2.87m people and with an area of about 29 thousand sq. km (about the size of Belgium) Albania has abundant water resources which include a 420 km coastline along the Adriatic and Ionian Seas, almost 250 natural lakes, and eight lagoons. These water bodies support a diverse ďŹ sheries and aquaculture sector encompassing marine, brackish water, and freshwater ďŹ sheries, and ďŹ sh and shellďŹ sh farming in the sea, on land, in freshwater, and in the lagoons.

he total output from all this activity has increased each year over the four years to 2018 though production from individual segments, such as the coastal line fishery and the lagoon fishery, has fluctuated. The sector also includes a dynamic processing industry dominated by a few big companies that produce for the domestic market and export under their own brands as well as private labels.

Wide variety of ďŹ sh and seafood caught by Albanian ďŹ&amp;#x201A;eet The Albanian fishing fleet is the oldest in the Mediterranean, according to the GFCM, with an average age per vessel of 43 years. In contrast, the Romanian fleet is the youngest with

an average of just 12 years per vessel. A 2018 paper in the Journal of Black Sea/Mediterranean Environment by researchers at the Agricultural University of Tirana estimates that the Albanian fleet was about a third of 1 percent (0.33ď&amp;#x2122;&amp;#x201A;) of the Mediterranean fleet in 2012. According to data from the GFCM the Albanian fleet comprised 534 vessels in total in 2018 of which 319 were less than 12 m. The fleet is based in the four main ports, Durres, Vlora, Saranda and Shengjin and targets a variety of species. Catch volumes are dominated by small pelagics, sardines and anchovies, followed by shrimps and prawns, and by whitefish such as hake and haddock. Lesser volumes of lobsters and cephalopods are also caught. Part of the fleet is owned by the

The hatchery at Linit near Pogradec where an endemic salmonid, koran (Salmo letnica), is bred for restocking in the Ohrid lake.

processing industry and catches by these vessels are processed by their owners. The catches by processors own vessels is however usually not enough to meet the parent companyâ&amp;#x20AC;&amp;#x2122;s requirements, so processors enter into contracts with independent vessels to secure a greater supply of raw materials. Albania is a candidate country to accede to the EU and in April 2018 the Commission recommended that accession negotiations be opened, a decision on which is to be taken by the Council later this year. In the meanwhile, Albania continues to implement reforms in the different chapters including fisheries, where progress has been made, for example, in updating the vessel register and landing

statistics, according to the 2019 report on Albania prepared by the Commission. Among other issues the report mentions the need to improve inspection and control capacity to fight illegal fishing an area that in the past has been weakened by a shortage of staff, inadequate budgets, and a lack of coordination between different agencies. Today, however, things look different. In addition to drafting and periodically reviewing the legislative framework, Albania has set up a national surveillance structure. The Interinstitutional Maritime Operational Centre IMOC, an inter-ministry institution that monitors the Albanian maritime space, is responsible, among other areas, for fishing, the protection of the marine environment, and marine resources.

This Eurofish Magazine issue features the fisheries and aquaculture industry in Albania and Denmark and the aquaculture section looks at the increasing demand for fish welfare while the species profile is on African catfish.