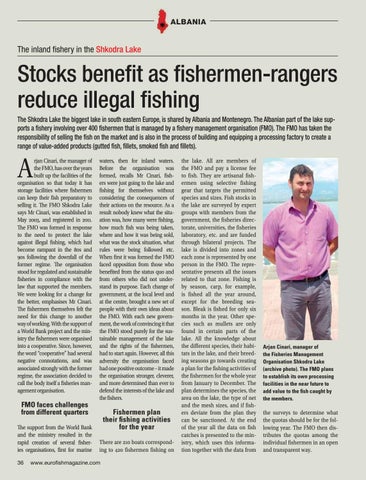 The inland ďŹ shery in the Shkodra Lake

Stocks beneďŹ t as ďŹ shermen-rangers reduce illegal ďŹ shing The Shkodra Lake the biggest lake in south eastern Europe, is shared by Albania and Montenegro. The Albanian part of the lake supports a ďŹ shery involving over 400 ďŹ shermen that is managed by a ďŹ shery management organisation (FMO). The FMO has taken the responsibility of selling the ďŹ sh on the market and is also in the process of building and equipping a processing factory to create a range of value-added products (gutted ďŹ sh, ďŹ llets, smoked ďŹ sh and ďŹ llets).

rjan Cinari, the manager of the FMO, has over the years built up the facilities of the organisation so that today it has storage facilities where fishermen can keep their fish preparatory to selling it. The FMO Shkodra Lake says Mr Cinari, was established in May 2003, and registered in 2011. The FMO was formed in response to the need to protect the lake against illegal fishing, which had become rampant in the 80s and 90s following the downfall of the former regime. The organisation stood for regulated and sustainable fisheries in compliance with the law that supported the members. We were looking for a change for the better, emphasises Mr Cinari. The fishermen themselves felt the need for this change to another way of working. With the support of a World Bank project and the ministry the fishermen were organised into a cooperative. Since, however, the word â&#x20AC;&#x153;cooperativeâ&#x20AC;? had several negative connotations, and was associated strongly with the former regime, the association decided to call the body itself a fisheries management organisation.

FMO faces challenges from different quarters The support from the World Bank and the ministry resulted in the rapid creation of several fisheries organisations, first for marine

waters, then for inland waters. Before the organisation was formed, recalls Mr Cinari, fishers were just going to the lake and fishing for themselves without considering the consequences of their actions on the resource. As a result nobody knew what the situation was, how many were fishing, how much fish was being taken, where and how it was being sold, what was the stock situation, what rules were being followed etc. When first it was formed the FMO faced opposition from those who benefited from the status quo and from others who did not understand its purpose. Each change of government, at the local level and at the centre, brought a new set of people with their own ideas about the FMO. With each new government, the work of convincing it that the FMO stood purely for the sustainable management of the lake and the rights of the fishermen, had to start again. However, all this adversity the organisation faced had one positive outcome â&#x20AC;&#x201C; it made the organisation stronger, cleverer, and more determined than ever to defend the interests of the lake and the fishers.

the lake. All are members of the FMO and pay a license fee to fish. They are artisanal fishermen using selective fishing gear that targets the permitted species and sizes. Fish stocks in the lake are surveyed by expert groups with members from the government, the fisheries directorate, universities, the fisheries laboratory, etc. and are funded through bilateral projects. The lake is divided into zones and each zone is represented by one person in the FMO. The representative presents all the issues related to that zone. Fishing is by season, carp, for example, is fished all the year around, except for the breeding season. Bleak is fished for only six months in the year. Other species such as mullets are only found in certain parts of the lake. All the knowledge about the different species, their habitats in the lake, and their breeding seasons go towards creating a plan for the fishing activities of the fishermen for the whole year from January to December. The plan determines the species, the area on the lake, the type of net and the mesh sizes, and if fishers deviate from the plan they can be sanctioned. At the end of the year all the data on fish catches is presented to the ministry, which uses this information together with the data from

Arjan Cinari, manager of the Fisheries Management Organisation Shkodra Lake (archive photo). The FMO plans to establish its own processing facilities in the near future to add value to the fish caught by the members.

the surveys to determine what the quotas should be for the following year. The FMO then distributes the quotas among the individual fishermen in an open and transparent way.