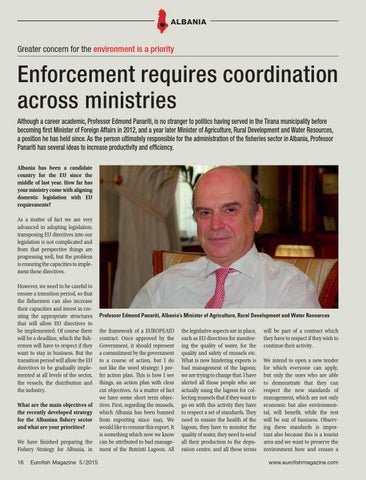 Greater concern for the environment is a priority

Enforcement requires coordination across ministries Although a career academic, Professor Edmond Panariti, is no stranger to politics having served in the Tirana municipality before becoming ďŹ rst Minister of Foreign Affairs in 2012, and a year later Minister of Agriculture, Rural Development and Water Resources, a position he has held since. As the person ultimately responsible for the administration of the ďŹ sheries sector in Albania, Professor Panariti has several ideas to increase productivity and efďŹ ciency. Albania has been a candidate country for the EU since the middle of last year. How far has your ministry come with aligning domestic legislation with EU requirements? As a matter of fact we are very advanced in adopting legislation; transposing EU directives into our legislation is not complicated and from that perspective things are progressing well, but the problem is ensuring the capacities to implement these directives. However, we need to be careful to ensure a transition period, so that the fishermen can also increase their capacities and invest in creating the appropriate structures that will allow EU directives to be implemented. Of course there will be a deadline, which the fishermen will have to respect if they want to stay in business. But the transition period will allow the EU directives to be gradually implemented at all levels of the sector, the vessels, the distribution and the industry. What are the main objectives of the recently developed strategy for the Albanian fishery sector and what are your priorities? We have finished preparing the Fishery Strategy for Albania, in 16

the framework of a EUROPEAID contract. Once approved by the Government, it should represent a commitment by the government to a course of action, but I do not like the word strategy; I prefer action plan. This is how I see things, an action plan with clear cut objectives. As a matter of fact we have some short term objectives. First, regarding the mussels, which Albania has been banned from exporting since 1995. We would like to resume this export. It is something which now we know can be attributed to bad management of the Butrinti Lagoon. All

the legislative aspects are in place, such as EU directives for monitoring the quality of water, for the quality and safety of mussels etc. What is now hindering exports is bad management of the lagoon; we are trying to change that. I have alerted all those people who are actually using the lagoon for collecting mussels that if they want to go on with this activity they have to respect a set of standards. They need to ensure the health of the lagoon, they have to monitor the quality of water, they need to send all their production to the depuration centre, and all these terms

will be part of a contract which they have to respect if they wish to continue their activity. We intend to open a new tender for which everyone can apply, but only the ones who are able to demonstrate that they can respect the new standards of management, which are not only economic but also environmental, will benefit, while the rest will be out of business. Observing these standards is important also because this is a tourist area and we want to preserve the environment here and ensure a www.eurofishmagazine.com