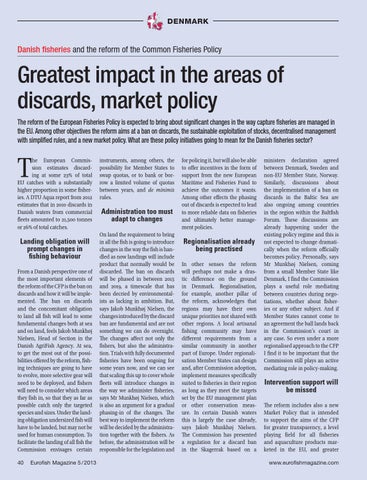 Danish ﬁsheries and the reform of the Common Fisheries Policy

Greatest impact in the areas of discards, market policy The reform of the European Fisheries Policy is expected to bring about signiﬁcant changes in the way capture ﬁsheries are managed in the EU. Among other objectives the reform aims at a ban on discards, the sustainable exploitation of stocks, decentralised management with simpliﬁed rules, and a new market policy. What are these policy initiatives going to mean for the Danish ﬁsheries sector?

he European Commission estimates discarding at some 23 of total EU catches with a substantially higher proportion in some fisheries. A DTU Aqua report from 2012 estimates that in 2010 discards in Danish waters from commercial fleets amounted to 21,500 tonnes or 26 of total catches.

Landing obligation will prompt changes in fishing behaviour From a Danish perspective one of the most important elements of the reform of the CFP is the ban on discards and how it will be implemented. The ban on discards and the concomitant obligation to land all fish will lead to some fundamental changes both at sea and on land, feels Jakob Munkhøj Nielsen, Head of Section in the Danish AgriFish Agency. At sea, to get the most out of the possibilities offered by the reform, fishing techniques are going to have to evolve, more selective gear will need to be deployed, and fishers will need to consider which areas they fish in, so that they as far as possible catch only the targeted species and sizes. Under the landing obligation undersized fish will have to be landed, but may not be used for human consumption. To facilitate the landing of all fish the Commission envisages certain 40

instruments, among others, the possibility for Member States to swap quotas, or to bank or borrow a limited volume of quotas between years, and de minimis rules.

Administration too must adapt to changes On land the requirement to bring in all the fish is going to introduce changes in the way the fish is handled as now landings will include product that normally would be discarded. The ban on discards will be phased in between 2015 and 2019, a timescale that has been decried by environmentalists as lacking in ambition. But, says Jakob Munkhøj Nielsen, the changes introduced by the discard ban are fundamental and are not something we can do overnight. The changes affect not only the fishers, but also the administration. Trials with fully documented fisheries have been ongoing for some years now, and we can see that scaling this up to cover whole fleets will introduce changes in the way we administer fisheries, says Mr Munkhøj Nielsen, which is also an argument for a gradual phasing-in of the changes. The best way to implement the reform will be decided by the administration together with the fishers. As before, the administration will be responsible for the legislation and

for policing it, but will also be able to offer incentives in the form of support from the new European Maritime and Fisheries Fund to achieve the outcomes it wants. Among other effects the phasing out of discards is expected to lead to more reliable data on fisheries and ultimately better management policies.

Regionalisation already being practised In other senses the reform will perhaps not make a drastic difference on the ground in Denmark. Regionalisation, for example, another pillar of the reform, acknowledges that regions may have their own unique priorities not shared with other regions. A local artisanal fishing community may have different requirements from a similar community in another part of Europe. Under regionalisation Member States can design and, after Commission adoption, implement measures specifically suited to fisheries in their region as long as they meet the targets set by the EU management plan or other conservation measure. In certain Danish waters this is largely the case already, says Jakob Munkhøj Nielsen. The Commission has presented a regulation for a discard ban in the Skagerrak based on a

ministers declaration agreed between Denmark, Sweden and non-EU Member State, Norway. Similarly, discussions about the implementation of a ban on discards in the Baltic Sea are also ongoing among countries in the region within the Baltfish Forum. These discussions are already happening under the existing policy regime and this is not expected to change dramatically when the reform officially becomes policy. Personally, says Mr Munkhøj Nielsen, coming from a small Member State like Denmark, I find the Commission plays a useful role mediating between countries during negotiations, whether about fisheries or any other subject. And if Member States cannot come to an agreement the ball lands back in the Commission’s court in any case. So even under a more regionalised approach to the CFP I find it to be important that the Commission still plays an active mediating role in policy-making.

Intervention support will be missed The reform includes also a new Market Policy that is intended to support the aims of the CFP for greater transparency, a level playing field for all fisheries and aquaculture products marketed in the EU, and greater www.eurofishmagazine.com