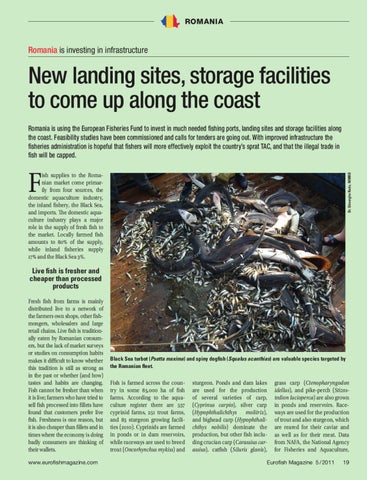 Romania is investing in infrastructure

New landing sites, storage facilities to come up along the coast Romania is using the European Fisheries Fund to invest in much needed fishing ports, landing sites and storage facilities along the coast. Feasibility studies have been commissioned and calls for tenders are going out. With improved infrastructure the fisheries administration is hopeful that fishers will more effectively exploit the country’s sprat TAC, and that the illegal trade in fish will be capped.

ish supplies to the Romanian market come primarily from four sources, the domestic aquaculture industry, the inland fishery, the Black Sea, and imports. The domestic aquaculture industry plays a major role in the supply of fresh fish to the market. Locally farmed fish amounts to 80 of the supply, while inland fisheries supply 17 and the Black Sea 3.

Live fish is fresher and cheaper than processed products Fresh fish from farms is mainly distributed live to a network of the farmers own shops, other fishmongers, wholesalers and large retail chains. Live fish is traditionally eaten by Romanian consumers, but the lack of market surveys or studies on consumption habits makes it difficult to know whether this tradition is still as strong as in the past or whether (and how) tastes and habits are changing. Fish cannot be fresher than when it is live; farmers who have tried to sell fish processed into fillets have found that customers prefer live fish. Freshness is one reason, but it is also cheaper than fillets and in times where the economy is doing badly consumers are thinking of their wallets. www.eurofishmagazine.com

Fish is farmed across the country in some 85,000 ha of fish farms. According to the aquaculture register there are 557 cyprinid farms, 251 trout farms, and 85 sturgeon growing facilities (2010). Cyprinids are farmed in ponds or in dam reservoirs, while raceways are used to breed trout (Oncorhynchus mykiss) and

grass carp (Ctenopharyngodon idellus), and pike-perch (Stizostedion lucioperca) are also grown in ponds and reservoirs. Raceways are used for the production of trout and also sturgeon, which are reared for their caviar and as well as for their meat. Data from NAFA, the National Agency for Fisheries and Aquaculture,