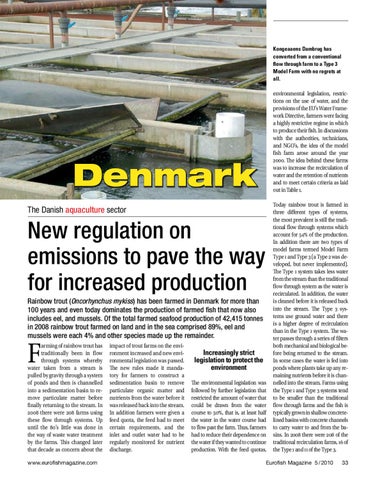 Kongeaaens Dambrug has converted from a conventional flow through farm to a Type 3 Model Farm with no regrets at all.

environmental legislation, restrictions on the use of water, and the provisions of the EU’s Water Framework Directive, farmers were facing a highly restrictive regime in which to produce their fish. In discussions with the authorities, technicians, and NGO’s, the idea of the model fish farm arose around the year 2000. The idea behind these farms was to increase the recirculation of water and the retention of nutrients and to meet certain criteria as laid out in Table 1.

New regulation on emissions to pave the way for increased production Rainbow trout (Oncorhynchus mykiss) has been farmed in Denmark for more than 100 years and even today dominates the production of farmed fish that now also includes eel, and mussels. Of the total farmed seafood production of 42,415 tonnes in 2008 rainbow trout farmed on land and in the sea comprised 89%, eel and mussels were each 4% and other species made up the remainder.

arming of rainbow trout has traditionally been in flow through systems whereby water taken from a stream is pulled by gravity through a system of ponds and then is channelled into a sedimentation basin to remove particulate matter before finally returning to the stream. In 2008 there were 208 farms using these flow through systems. Up until the 80’s little was done in the way of waste water treatment by the farms. This changed later that decade as concern about the www.eurofishmagazine.com

impact of trout farms on the environment increased and new environmental legislation was passed. The new rules made it mandatory for farmers to construct a sedimentation basin to remove particulate organic matter and nutrients from the water before it was released back into the stream. In addition farmers were given a feed quota, the feed had to meet certain requirements, and the inlet and outlet water had to be regularly monitored for nutrient discharge.

Today rainbow trout is farmed in three different types of systems, the most prevalent is still the traditional flow through systems which account for 54% of the production. In addition there are two types of model farms termed Model Farm Type 1 and Type 3 (a Type 2 was developed, but never implemented). The Type 1 system takes less water from the stream than the traditional flow through system as the water is recirculated. In addition, the water is cleaned before it is released back into the stream. The Type 3 systems use ground water and there is a higher degree of recirculation than in the Type 1 system. The water passes through a series of filters both mechanical and biological before being returned to the stream. In some cases the water is fed into ponds where plants take up any remaining nutrients before it is channelled into the stream. Farms using the Type 1 and Type 3 systems tend to be smaller than the traditional flow through farms and the fish is typically grown in shallow concretelined basins with concrete channels to carry water to and from the basins. In 2008 there were 208 of the traditional recirculation farms, 16 of the Type 1 and 11 of the Type 3.