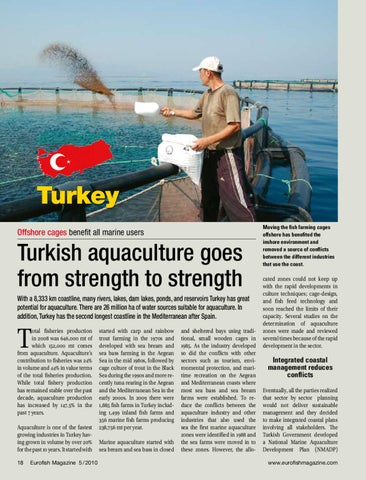 Turkish aquaculture goes from strength to strength With a 8,333 km coastline, many rivers, lakes, dam lakes, ponds, and reservoirs Turkey has great potential for aquaculture. There are 26 million ha of water sources suitable for aquaculture. In addition, Turkey has the second longest coastline in the Mediterranean after Spain.

started with carp and rainbow trout farming in the 1970s and developed with sea bream and sea bass farming in the Aegean Sea in the mid 1980s, followed by cage culture of trout in the Black Sea during the 1990s and more recently tuna rearing in the Aegean and the Mediterranean Sea in the early 2000s. In 2009 there were 1,885 fish farms in Turkey including 1,499 inland fish farms and 356 marine fish farms producing 238,756 mt per year. Marine aquaculture started with sea bream and sea bass in closed

and sheltered bays using traditional, small wooden cages in 1985. As the industry developed so did the conflicts with other sectors such as tourism, environmental protection, and maritime recreation on the Aegean and Mediterranean coasts where most sea bass and sea bream farms were established. To reduce the conflicts between the aquaculture industry and other industries that also used the sea the first marine aquaculture zones were identified in 1988 and the sea farms were moved in to these zones. However, the allo-

Moving the fish farming cages offshore has benefited the inshore environment and removed a source of conflicts between the different industries that use the coast.

cated zones could not keep up with the rapid developments in culture techniques; cage-design, and fish feed technology and soon reached the limits of their capacity. Several studies on the determination of aquaculture zones were made and reviewed several times because of the rapid development in the sector.