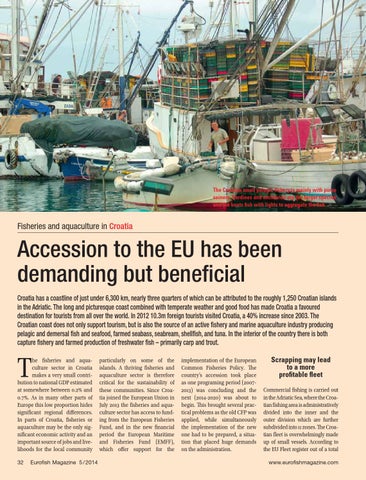 The Croatian small pelagic fishery is mainly with purse seiners. Sardines and anchovies are the target species and the boats fish with lights to aggregate the fish.

Fisheries and aquaculture in Croatia

Accession to the EU has been demanding but beneďŹ cial Croatia has a coastline of just under 6,300 km, nearly three quarters of which can be attributed to the roughly 1,250 Croatian islands in the Adriatic. The long and picturesque coast combined with temperate weather and good food has made Croatia a favoured destination for tourists from all over the world. In 2012 10.3m foreign tourists visited Croatia, a 40% increase since 2003. The Croatian coast does not only support tourism, but is also the source of an active ďŹ shery and marine aquaculture industry producing pelagic and demersal ďŹ sh and seafood, farmed seabass, seabream, shellďŹ sh, and tuna. In the interior of the country there is both capture ďŹ shery and farmed production of freshwater ďŹ sh â&#x20AC;&#x201C; primarily carp and trout.

he fisheries and aquaculture sector in Croatia makes a very small contribution to national GDP estimated at somewhere between 0.2ď&#x2122;&#x201A; and 0.7ď&#x2122;&#x201A;. As in many other parts of Europe this low proportion hides significant regional differences. In parts of Croatia, fisheries or aquaculture may be the only significant economic activity and an important source of jobs and livelihoods for the local community 32

implementation of the European Common Fisheries Policy. The countryâ&#x20AC;&#x2122;s accession took place as one programing period (20072013) was concluding and the next (2014-2020) was about to begin. This brought several practical problems as the old CFP was applied, while simultaneously the implementation of the new one had to be prepared, a situation that placed huge demands on the administration.

Scrapping may lead to a more profitable fleet Commercial fishing is carried out in the Adriatic Sea, where the Croatian fishing area is administratively divided into the inner and the outer division which are further subdivided into 11 zones. The Croatian fleet is overwhelmingly made up of small vessels. According to the EU Fleet register out of a total www.eurofishmagazine.com

Featuring Croatia, this issue also looks at superchilling and the trade section views the impact of Russia's ban on seafood products.

Featuring Croatia, this issue also looks at superchilling and the trade section views the impact of Russia's ban on seafood products.