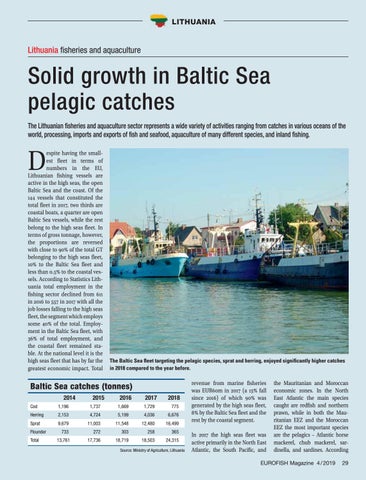 Solid growth in Baltic Sea pelagic catches The Lithuanian ďŹ sheries and aquaculture sector represents a wide variety of activities ranging from catches in various oceans of the world, processing, imports and exports of ďŹ sh and seafood, aquaculture of many different species, and inland ďŹ shing.

The Baltic Sea ďŹ&amp;#x201A;eet targeting the pelagic species, sprat and herring, enjoyed signiďŹ cantly higher catches in 2018 compared to the year before.

the Mauritanian and Moroccan economic zones. In the North East Atlantic the main species caught are redfish and northern prawn, while in both the Mauritanian EEZ and the Moroccan EEZ the most important species are the pelagics â&amp;#x20AC;&amp;#x201C; Atlantic horse mackerel, chub mackerel, sardinella, and sardines. According

Featuring the fisheries and aquaculture sector Lithuania and Georgia, this issue also looks at big data and artificial intelligence in the fish industry