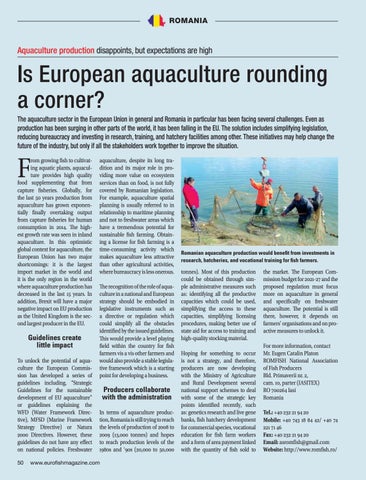 Is European aquaculture rounding a corner? The aquaculture sector in the European Union in general and Romania in particular has been facing several challenges. Even as production has been surging in other parts of the world, it has been falling in the EU. The solution includes simplifying legislation, reducing bureaucracy and investing in research, training, and hatchery facilities among other. These initiatives may help change the future of the industry, but only if all the stakeholders work together to improve the situation.

rom growing fish to cultivating aquatic plants, aquaculture provides high quality food supplementing that from capture fisheries. Globally, for the last 50 years production from aquaculture has grown exponentially finally overtaking output from capture fisheries for human consumption in 2014. The highest growth rate was seen in inland aquaculture. In this optimistic global context for aquaculture, the European Union has two major shortcomings: it is the largest import market in the world and it is the only region in the world where aquaculture production has decreased in the last 15 years. In addition, Brexit will have a major negative impact on EU production as the United Kingdom is the second largest producer in the EU.

Guidelines create little impact To unlock the potential of aquaculture the European Commission has developed a series of guidelines including, â&#x20AC;&#x153;Strategic Guidelines for the sustainable development of EU aquacultureâ&#x20AC;? or guidelines explaining the WFD (Water Framework Directive), MFSD (Marine Framework Strategy Directive) or Natura 2000 Directives. However, these guidelines do not have any effect on national policies. Freshwater 50

aquaculture, despite its long tradition and its major role in providing more value on ecosystem services than on food, is not fully covered by Romanian legislation. For example, aquaculture spatial planning is usually referred to in relationship to maritime planning and not to freshwater areas which have a tremendous potential for sustainable fish farming. Obtaining a license for fish farming is a time-consuming activity which makes aquaculture less attractive than other agricultural activities, where bureaucracy is less onerous. The recognition of the role of aquaculture in a national and European strategy should be embodied in legislative instruments such as a directive or regulation which could simplify all the obstacles identified by the issued guidelines. This would provide a level playing field within the country for fish farmers vis a vis other farmers and would also provide a stable legislative framework which is a starting point for developing a business.

tonnes). Most of this production could be obtained through simple administrative measures such as: identifying all the productive capacities which could be used, simplifying the access to these capacities, simplifying licensing procedures, making better use of state aid for access to training and high-quality stocking material. Hoping for something to occur is not a strategy, and therefore, producers are now developing with the Ministry of Agriculture and Rural Development several national support schemes to deal with some of the strategic key points identified recently, such as: genetics research and live gene banks, fish hatchery development for commercial species, vocational education for fish farm workers and a form of area payment linked with the quantity of fish sold to