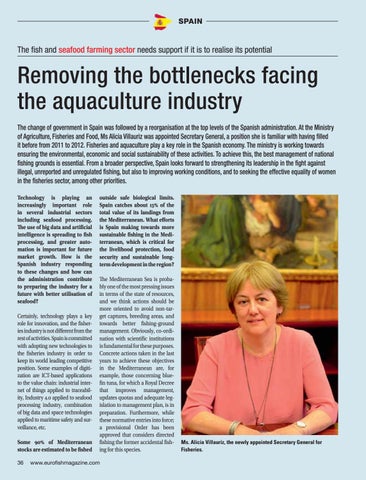 Removing the bottlenecks facing the aquaculture industry The change of government in Spain was followed by a reorganisation at the top levels of the Spanish administration. At the Ministry of Agriculture, Fisheries and Food, Ms Alicia Villauriz was appointed Secretary General, a position she is familiar with having ďŹ lled it before from 2011 to 2012. Fisheries and aquaculture play a key role in the Spanish economy. The ministry is working towards ensuring the environmental, economic and social sustainability of these activities. To achieve this, the best management of national ďŹ shing grounds is essential. From a broader perspective, Spain looks forward to strengthening its leadership in the ďŹ ght against illegal, unreported and unregulated ďŹ shing, but also to improving working conditions, and to seeking the effective equality of women in the ďŹ sheries sector, among other priorities. Technology is playing an increasingly important role in several industrial sectors including seafood processing. The use of big data and artificial intelligence is spreading to fish processing, and greater automation is important for future market growth. How is the Spanish industry responding to these changes and how can the administration contribute to preparing the industry for a future with better utilisation of seafood? Certainly, technology plays a key role for innovation, and the fisheries industry is not different from the rest of activities. Spain is committed with adopting new technologies to the fisheries industry in order to keep its world leading competitive position. Some examples of digitization are ICT-based applications to the value chain: industrial internet of things applied to traceability, Industry 4.0 applied to seafood processing industry, combination of big data and space technologies applied to maritime safety and surveillance, etc. Some 90ď&#x2122;&#x201A; of Mediterranean stocks are estimated to be fished 36

outside safe biological limits. Spain catches about 15ď&#x2122;&#x201A; of the total value of its landings from the Mediterranean. What efforts is Spain making towards more sustainable fishing in the Mediterranean, which is critical for the livelihood protection, food security and sustainable longterm development in the region? The Mediterranean Sea is probably one of the most pressing issues in terms of the state of resources, and we think actions should be more oriented to avoid non-target captures, breeding areas, and towards better fishing-ground management. Obviously, co-ordination with scientific institutions is fundamental for these purposes. Concrete actions taken in the last years to achieve these objectives in the Mediterranean are, for example, those concerning bluefin tuna, for which a Royal Decree that improves management, updates quotas and adequate legislation to management plan, is in preparation. Furthermore, while these normative entries into force; a provisional Order has been approved that considers directed fishing the former accidental fishing for this species.