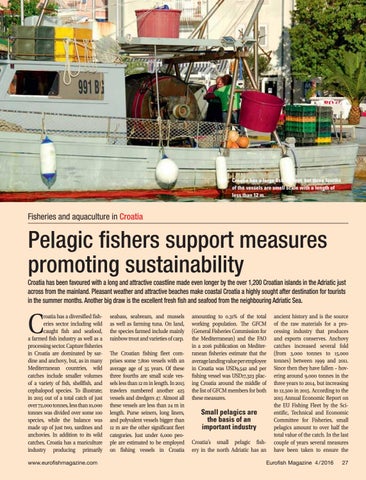 Croatia has a large fishing fleet, but three fourths of the vessels are small scale with a length of less than 12 m.

Fisheries and aquaculture in Croatia

Pelagic ﬁshers support measures promoting sustainability Croatia has been favoured with a long and attractive coastline made even longer by the over 1,200 Croatian islands in the Adriatic just across from the mainland. Pleasant weather and attractive beaches make coastal Croatia a highly sought after destination for tourists in the summer months. Another big draw is the excellent fresh ﬁsh and seafood from the neighbouring Adriatic Sea.

roatia has a diversified fisheries sector including wild caught fish and seafood, a farmed fish industry as well as a processing sector. Capture fisheries in Croatia are dominated by sardine and anchovy, but, as in many Mediterranean countries, wild catches include smaller volumes of a variety of fish, shellfish, and cephalopod species. To illustrate; in 2015 out of a total catch of just over 72,000 tonnes, less than 10,000 tonnes was divided over some 100 species, while the balance was made up of just two, sardines and anchovies. In addition to its wild catches, Croatia has a mariculture industry producing primarily

seabass, seabream, and mussels as well as farming tuna. On land, the species farmed include mainly rainbow trout and varieties of carp. The Croatian fishing fleet comprises some 7,800 vessels with an average age of 35 years. Of these three fourths are small scale vessels less than 12 m in length. In 2015 trawlers numbered another 425 vessels and dredgers 47. Almost all these vessels are less than 24 m in length. Purse seiners, long liners, and polyvalent vessels bigger than 12 m are the other significant fleet categories. Just under 6,000 people are estimated to be employed on fishing vessels in Croatia

amounting to 0.31 of the total working population. The GFCM (General Fisheries Commission for the Mediterranean) and the FAO in a 2016 publication on Mediterranean fisheries estimate that the average landing value per employee in Croatia was USD9,542 and per fishing vessel was USD17,323 placing Croatia around the middle of the list of GFCM members for both these measures.

ancient history and is the source of the raw materials for a processing industry that produces and exports conserves. Anchovy catches increased several fold (from 3,000 tonnes to 15,000 tonnes) between 1999 and 2011. Since then they have fallen – hovering around 9,000 tonnes in the three years to 2014, but increasing to 12,500 in 2015. According to the 2015 Annual Economic Report on the EU Fishing Fleet by the Scientific, Technical and Economic Committee for Fisheries, small pelagics amount to over half the total value of the catch. In the last couple of years several measures have been taken to ensure the

Featuring Croatia and Lithuania, this issue also looks at fish processing cuts along with Northern shrimp.

Featuring Croatia and Lithuania, this issue also looks at fish processing cuts along with Northern shrimp.