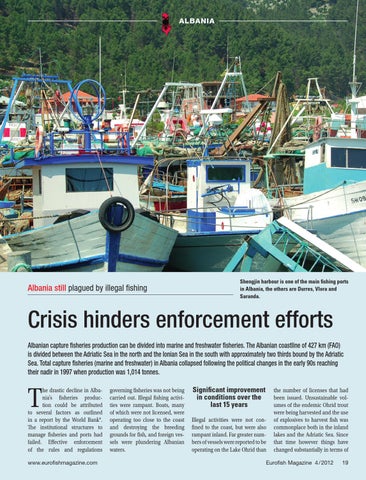 Shengjin harbour is one of the main fishing ports in Albania, the others are Durres, Vlora and Saranda.

Crisis hinders enforcement efforts Albanian capture fisheries production can be divided into marine and freshwater fisheries. The Albanian coastline of 427 km (FAO) is divided between the Adriatic Sea in the north and the Ionian Sea in the south with approximately two thirds bound by the Adriatic Sea. Total capture fisheries (marine and freshwater) in Albania collapsed following the political changes in the early 90s reaching their nadir in 1997 when production was 1,014 tonnes.

he drastic decline in Albaniaâ&#x20AC;&#x2122;s fisheries production could be attributed to several factors as outlined in a report by the World Bank*. The institutional structures to manage fisheries and ports had failed. Effective enforcement of the rules and regulations

governing fisheries was not being carried out. Illegal fishing activities were rampant. Boats, many of which were not licensed, were operating too close to the coast and destroying the breeding grounds for fish, and foreign vessels were plundering Albanian waters.

Significant improvement in conditions over the last 15 years Illegal activities were not confined to the coast, but were also rampant inland. Far greater numbers of vessels were reported to be operating on the Lake Ohrid than

the number of licenses that had been issued. Unsustainable volumes of the endemic Ohrid trout were being harvested and the use of explosives to harvest fish was commonplace both in the inland lakes and the Adriatic Sea. Since that time however things have changed substantially in terms of

The lastest issue of the Eurofish Magazine covers Albania and Belarus and the technology section looks at refridgeration.

The lastest issue of the Eurofish Magazine covers Albania and Belarus and the technology section looks at refridgeration.