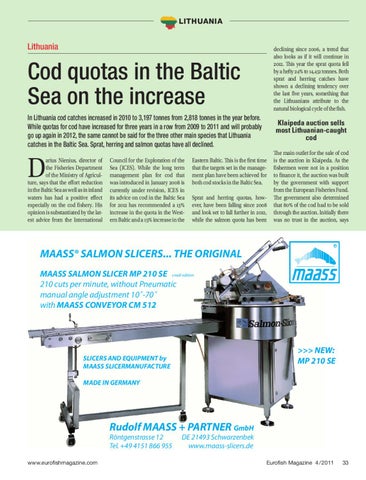 declining since 2006, a trend that also looks as if it will continue in 2012. This year the sprat quota fell by a hefty 24 to 14,451 tonnes. Both sprat and herring catches have shown a declining tendency over the last five years, something that the Lithuanians attribute to the natural biological cycle of the fish.

Cod quotas in the Baltic Sea on the increase In Lithuania cod catches increased in 2010 to 3,197 tonnes from 2,818 tonnes in the year before. While quotas for cod have increased for three years in a row from 2009 to 2011 and will probably go up again in 2012, the same cannot be said for the three other main species that Lithuania catches in the Baltic Sea. Sprat, herring and salmon quotas have all declined.

arius Nienius, director of the Fisheries Department of the Ministry of Agriculture, says that the effort reduction in the Baltic Sea as well as in inland waters has had a positive effect especially on the cod fishery. His opinion is substantiated by the latest advice from the International

Council for the Exploration of the Sea (ICES). While the long term management plan for cod that was introduced in January 2008 is currently under revision, ICES in its advice on cod in the Baltic Sea for 2012 has recommended a 13 increase in the quota in the Western Baltic and a 15 increase in the

Eastern Baltic. This is the first time that the targets set in the management plan have been achieved for both cod stocks in the Baltic Sea. Sprat and herring quotas, however, have been falling since 2008 and look set to fall further in 2012, while the salmon quota has been

The main outlet for the sale of cod is the auction in Klaipeda. As the fishermen were not in a position to finance it, the auction was built by the government with support from the European Fisheries Fund. The government also determined that 80 of the cod had to be sold through the auction. Initially there was no trust in the auction, says

SLICERS AND EQUIPMENT by MAASS SLICERMANUFACTURE MADE IN GERMANY

This issue of the Eurofish Magazine features Lithuanias fisheries industry and reviews the ESE show in Brussels.

This issue of the Eurofish Magazine features Lithuanias fisheries industry and reviews the ESE show in Brussels.