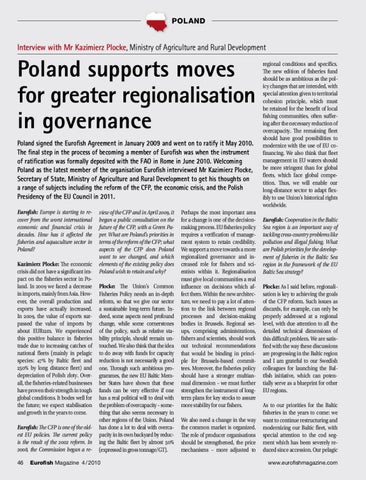 Poland supports moves for greater regionalisation in governance Poland signed the Eurofish Agreement in January 2009 and went on to ratify it May 2010. The final step in the process of becoming a member of Eurofish was when the instrument of ratification was formally deposited with the FAO in Rome in June 2010. Welcoming Poland as the latest member of the organisation Eurofish interviewed Mr Kazimierz Plocke, Secretary of State, Ministry of Agriculture and Rural Development to get his thoughts on a range of subjects including the reform of the CFP, the economic crisis, and the Polish Presidency of the EU Council in 2011. Eurofish: Europe is starting to recover from the worst international economic and financial crisis in decades. How has it affected the fisheries and aquaculture sector in Poland? Kazimierz Plocke: The economic crisis did not have a significant impact on the fisheries sector in Poland. In 2009 we faced a decrease in imports, mainly from Asia. However, the overall production and exports have actually increased. In 2009, the value of exports surpassed the value of imports by about EUR12m. We experienced this positive balance in fisheries trade due to increasing catches of national fleets (mainly in pelagic species: 47% by Baltic fleet and 250% by long distance fleet) and depreciation of Polish zloty. Overall, the fisheries-related businesses have proven their strength in tough global conditions. It bodes well for the future; we expect stabilisation and growth in the years to come. Eurofish: The CFP is one of the oldest EU policies. The current policy is the result of the 2002 reform. In 2008, the Commission began a re-

view of the CFP and in April 2009, it began a public consultation on the future of the CFP, with a Green Paper. What are Poland’s priorities in terms of the reform of the CFP; what aspects of the CFP does Poland want to see changed, and which elements of the existing policy does Poland wish to retain and why? Plocke: The Union’s Common Fisheries Policy needs an in-depth reform, so that we give our sector a sustainable long-term future. Indeed, some aspects need profound change, while some cornerstones of the policy, such as relative stability principle, should remain untouched. We also think that the idea to do away with funds for capacity reduction is not necessarily a good one. Through such ambitious programmes, the new EU Baltic Member States have shown that these funds can be very effective if one has a real political will to deal with the problem of overcapacity – something that also seems necessary in other regions of the Union. Poland has done a lot to deal with overcapacity in its own backyard by reducing the Baltic fleet by almost 50% (expressed in gross tonnage/GT).

Perhaps the most important area for a change is one of the decisionmaking process. EU fisheries policy requires a verification of management system to retain credibility. We support a move towards a more regionalized governance and increased role for fishers and scientists within it. Regionalisation must give local communities a real influence on decisions which affect them. Within the new architecture, we need to pay a lot of attention to the link between regional processes and decision-making bodies in Brussels. Regional setups, comprising administrations, fishers and scientists, should work out technical recommendations that would be binding in principle for Brussels-based committees. Moreover, the fisheries policy should have a stronger multiannual dimension – we must further strengthen the instrument of longterm plans for key stocks to assure more stability for our fishers. We also need a change in the way the common market is organized. The role of producer organisations should be strengthened, the price mechanisms – more adjusted to

regional conditions and specifics. The new edition of fisheries fund should be as ambitious as the policy changes that are intended, with special attention given to territorial cohesion principle, which must be retained for the benefit of local fishing communities, often suffering after the necessary reduction of overcapacity. The remaining fleet should have good possibilities to modernize with the use of EU cofinancing. We also think that fleet management in EU waters should be more stringent than for global fleets, which face global competition. Thus, we will enable our long-distance sector to adapt flexibly to use Union’s historical rights ­worldwide. Eurofish: Cooperation in the Baltic Sea region is an important way of tackling cross-country problems like pollution and illegal fishing. What are Polish priorities for the development of fisheries in the Baltic Sea region in the framework of the EU Baltic Sea strategy? Plocke: As I said before, regionalisation is key to achieving the goals of the CFP reform. Such issues as discards, for example, can only be properly addressed at a regional level, with due attention to all the detailed technical dimensions of this difficult problem. We are satisfied with the way these discussions are progressing in the Baltic region and I am grateful to our Swedish colleagues for launching the Baltfish initiative, which can potentially serve as a blueprint for other EU regions. As to our priorities for the Baltic fisheries in the years to come: we want to continue restructuring and modernizing our Baltic fleet, with special attention to the cod segment which has been severely reduced since accession. Our p­ elagic www.eurofishmagazine.com