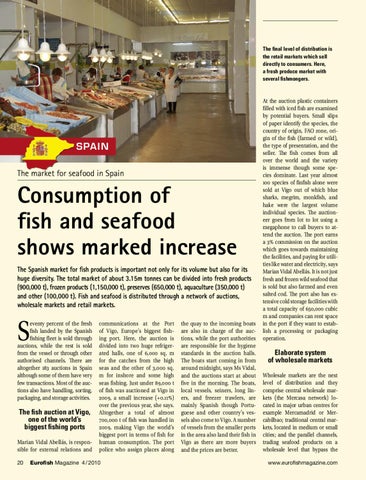 The final level of distribution is the retail markets which sell directly to consumers. Here, a fresh produce market with several fishmongers.

spain The market for seafood in Spain

Consumption of fish and seafood shows marked increase The Spanish market for fish products is important not only for its volume but also for its huge diversity. The total market of about 3.15m tonnes can be divided into fresh products (900,000 t), frozen products (1,150,000 t), preserves (650,000 t), aquaculture (350,000 t) and other (100,000 t). Fish and seafood is distributed through a network of auctions, wholesale markets and retail markets.

eventy percent of the fresh fish landed by the Spanish fishing fleet is sold through auctions, while the rest is sold from the vessel or through other authorised channels. There are altogether 183 auctions in Spain although some of them have very few transactions. Most of the auctions also have handling, sorting, packaging, and storage activities.

The fish auction at Vigo, one of the world’s biggest fishing ports Marian Vidal Abellás, is responsible for external relations and

communications at the Port of Vigo, Europe’s biggest fishing port. Here, the auction is divided into two huge refrigerated halls, one of 6,000 sq. m for the catches from the high seas and the other of 3,000 sq. m for inshore and some high seas fishing. Just under 89,000 t of fish was auctioned at Vigo in 2009, a small increase (+0.11%) over the previous year, she says. Altogether a total of almost 700,000 t of fish was handled in 2009, making Vigo the world’s biggest port in terms of fish for human consumption. The port police who assign places along

the quay to the incoming boats are also in charge of the auctions, while the port authorities are responsible for the hygiene standards in the auction halls. The boats start coming in from around midnight, says Ms Vidal, and the auctions start at about five in the morning. The boats, local vessels, seiners, long liners, and freezer trawlers, are mainly Spanish though Portuguese and other country’s vessels also come to Vigo. A number of vessels from the smaller ports in the area also land their fish in Vigo as there are more buyers and the prices are better.

At the auction plastic containers filled with iced fish are examined by potential buyers. Small slips of paper identify the species, the country of origin, FAO zone, origin of the fish (farmed or wild), the type of presentation, and the seller. The fish comes from all over the world and the variety is immense though some species dominate. Last year almost 100 species of finfish alone were sold at Vigo out of which blue sharks, megrim, monkfish, and hake were the largest volume individual species. The auctioneer goes from lot to lot using a megaphone to call buyers to attend the auction. The port earns a 3% commission on the auction which goes towards maintaining the facilities, and paying for utilities like water and electricity, says Marian Vidal Abellás. It is not just fresh and frozen wild seafood that is sold but also farmed and even salted cod. The port also has extensive cold storage facilities with a total capacity of 650,000 cubic m and companies can rent space in the port if they want to establish a processing or packaging ­operation.

Elaborate system of wholesale markets Wholesale markets are the next level of distribution and they comprise central wholesale markets (the Mercasa network) located in major urban centres for example Mercamadrid or Mercabilbao; traditional central markets, located in medium or small cities; and the parallel channels, trading seafood products on a wholesale level that bypass the www.eurofishmagazine.com